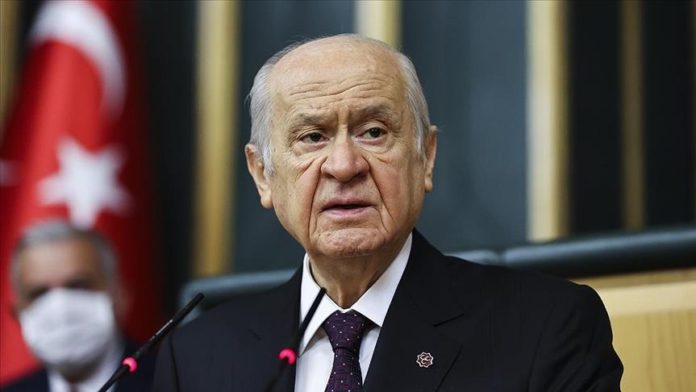 Turkey’s withdrawal from the Istanbul Convention is a legal act, the Nationalist Movement Party (MHP) leader said on Tuesday.

“The signatory country has a right to withdraw from the convention as well as to be a party to it by signing the treaty, it is a legal right. The termination of the convention is a right and appropriate act,” Devlet Bahceli told his party’s parliamentary group.

He said that the Istanbul Convention, a European treaty protecting women against violence, could not meet the expectations of the Turkish nation.

“Moreover, the provisions of the [Istanbul] convention on gender identity threatened family, and moral values, as well as social order and balance,” he added.

He stressed that the MHP unconditionally rejects violence against women.

President Recep Tayyip Erdogan signed a decree on March 20 to withdraw Turkey from the Istanbul Convention, which it had signed in 2011, the first country to do so.

The Turkish government has rejected criticisms, saying the withdrawal decision “by no means denotes that Turkey compromises on the protection of women.”

While the convention was enforced in 34 countries, including Turkey, some countries – Ukraine, the UK, the Czech Republic, Slovakia, Moldova, Lithuania, Liechtenstein, Latvia, Hungary, Armenia, and Bulgaria – signed the document but have yet to ratify it.

Some items of the convention caused debate over gender equality in Turkey, with critics saying they damage traditional family values.

Turkish officials say national legislation is enough to defend women from violence without need for the convention.