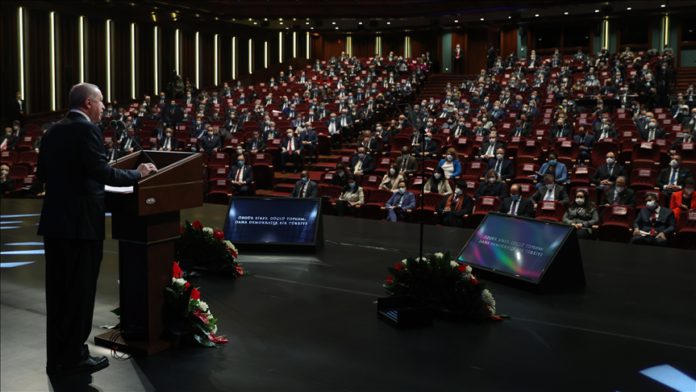 “One of the most important aspects with regard to the protection of the security of an individual is to fight against domestic violence and violence against women,” Recep Tayyip Erdogan said, unveiling the main 11 principles of the Human Rights Action Plan, set to be carried out over the course of two years.

Speaking at the Bestepe National Congress and Culture Center in the capital Ankara on March 2, Erdogan stressed that the plan is the fruit of broad-based consultation with the Turkish public.

The Turkish president recalled country’s law on the protection of the family and the prevention of violence against women and referred to it as a “very progressive legislation.”

He vowed to continue efforts in supporting all institutions, civil society, the media and society at large until the day when not a single woman is a victim of violence.

“The Action Plan foresees a broader network of special investigation offices across the country to investigate crimes of violence against women more effectively,” Erdogan added in his remarks.

In this respect, the action plan aims to extend the scope of aggravating circumstances for offenses committed against a woman, which will include both spouse and divorced spouse.

The plan further aims to criminalize stalking including unilateral pursuit as a separate crime, while it aims to ensure that lawyers are appointed to support women who are victims of violence.

“The action plan addresses the protection of the dignity and honor of individuals separately from the protection against physical violence,” Erdogan said.

Measures to be taken

Commenting on the action plan’s goals to effectively fight against domestic violence, Cem Duran Uzun, director of Law and Human Rights at the Ankara-based Foundation for Political, Economic and Social Research (SETA), told Anadolu agency that the plan includes actions aimed at determining the causes that lead to violence and preventing it.

“In the past, many regulations have been made and many reforms have been implemented to prevent violence against women,” Uzun told Anadolu Agency.

Uzun said the action plan also envisages the issues caused by lack of implementation of reforms and regulations.

“Thus, the action plan aims to increase the number of special investigation offices and to provide regular trainings for judges and prosecutors who will deal with crimes of violence against women,” he added.

“The plan includes many actions that will ensure progress in combating violence against women,” he said, adding that the monitoring and evaluation board that is planned to be established will ensure the success of the reform.

To a question about its implementation, the legal expert said it is evident that “the plan will not remain on paper, because a calendar will be announced and actions will be taken in line with this calendar.”

“Therefore, we can say that the will to fight violence against women has been decisive,” he noted.

‘Woman, a pillar of family’

Fatma Aksal, head of Turkish Parliament’s Committee on Equality of Opportunity for Women and Men (KEFEK), said the action plan would be helpful in countering domestic violence.

“We always say that violence against women is a humanitarian crime. We will never allow our women to be subjected to violence, we have done very important work since the day we came to power,” Aksal said.

She described the law on the protection of the family and the prevention of violence against women as “highly valuable one.”

Describing the Human Rights Action Plan as “highly significant” as a woman and KEFEK head, Aksal said five ministries will be given a role ensuring the action plan is implemented at all levels across Turkey.

“Violence against women is a matter beyond politics and concerns all segments of society,” she said.

Stressing that punishment on violence against women is “very important,” Aksal said it is equally important to prevent violence before it happens.

The plan is the main policy document for Turkey as the country prepares to mark its 100th anniversary in 2023. The document emphasizes property rights, vested rights, individual criminal responsibility, and the presumption of innocence while also enhancing transparency, accountability, and judicial independence, and objectivity.