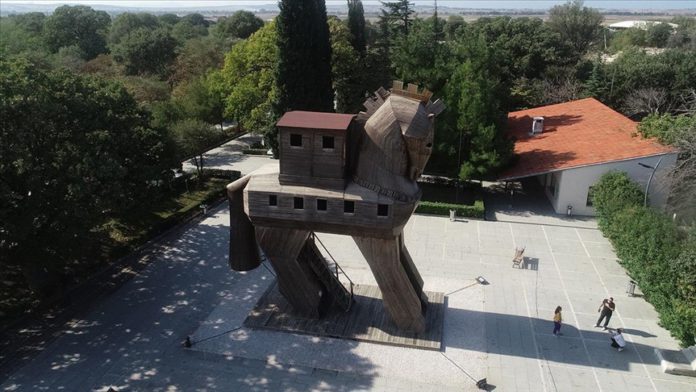 Tourism professionals in Western Canakkale province, rich in culture and history as well as offering a “sea, sand and sun trilogy,” are preparing for Russian visitors in the summer.

To increase the potential of foreign tourists, especially to overcome problems faced because of the coronavirus, they are focused on promotions to appeal to markets from different countries.

Mehmet Hilmi Satar, Canakkale representative of the Turkish Hotel Association (TUROB), told Anadolu Agency that hotels are working to attract the potential tourism movement from Russia to foreign countries to the Turkish market and Canakkale.

“The Russian market is very important for us,” he said. “We hosted the Russian state television channel here and talked about Turkish tourism and Canakkale. They welcomed us very positively. In interviews, we stated that we want to host our Russian guests here.”

Satar said in addition to the historic importance of Canakkale, many other interesting opportunities exist in the province such as windsurfing and hiking.

He said some time back, the province hosted Russian singer and songwriter Vlad Sokolovsky, who visited Assos and the ancient city of Troy and took a picture in front of the Trojan Horse.

“We want to show that it is a place that stands out with its calmness, especially during the pandemic period,” according to Satar, who said that Sokolovsky shared photos from his Canakkale trip on social media accounts with more than 1 million followers.

Referring to the proximity of Canakkale to Istanbul, Satar said that officials tried to explain that especially with the completion of the 1915 Canakkale Bridge, convenient road transportation to the city will be provided and the city is located where it can be visited even on a day-trip.

He said that the province also highlights the Kaz Mountains, which have the most oxygen in the world after the Alps, and it is located within the provincial borders of Canakkale.

“I hope the sector will recover quickly, especially after the vaccine privilege given to our industry. I predict that there will be a significant movement starting from the summer months both in the domestic market and in the Balkans,” he added.