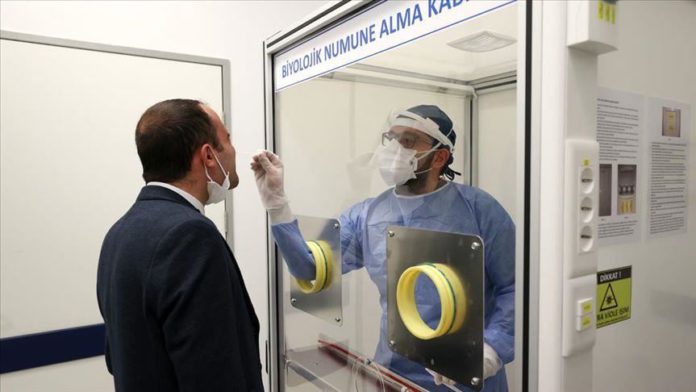 The emergence of the novel coronavirus in Wuhan city, China has been a milestone in the 21st century with hundreds of millions of people undergoing self-isolation to curb the spread of the disease.

During this period, all eyes have been on national healthcare systems and their response to the virus.

Like other parts of the world, Turkey has taken a hit from the virus with more than 126,000 cases and 3,397 deaths. But there is a catch: the fatality rate in Turkey is much lower compared to the top 10 countries with the highest number of confirmed cases, with deaths per million currently at 40, according to Worldometer, a provider of global COVID-19 statistics. More than 63,000 people have recovered in Turkey.

Senior officials have repeatedly said they trust the “robust” Turkish healthcare system, which is backed by indigenous technology, in fighting the virus.

The attention Turkey pays to the health sector was evident in the 2020 budget when it allocated 188.6 billion Turkish liras ($27 billion) for healthcare services in a budget of 1.95 trillion liras ($278 billion).

The 2020 budget allocated 58.8 billion liras ($8.4 billion) directly for the Health Ministry, which ranks fourth among the top 10 institutions receiving the highest share of the budget. Most notably, the health service share in the budget was 11.3% in 2002, but that climbed to 17.2% in 2020.

As for the number of health care employees — including those working for the Health Ministry, universities and private sector — Turkey has almost 165,000 doctors, more than 32,000 dentists, over a quarter of a million nurses and midwives, and an excess of 591,000 staff working in the health care system.

Although purchasing power parity of the health services in Turkey was designated as $922 in the Organization for Economic Cooperation and Development Health Data 2018 report, and the OECD average as $2,930, the Turkish nationals demonstrated the highest satisfaction rates for health services, according to the 2020 budget presentation of the health minister.

The latest figures suggest that over 70% of Turks are satisfied with the health care services offered in the country.

Standing as the world’s top refugee-hosting country with more than 3.6 million displaced Syrians, Turkey also pays great attention to the health of refugees and asylum seekers within its borders. Backed by the EU, Turkey has established 182 migrant healthcare centers, providing health services to them with 773 health units.

Turkey operates 17 helicopter ambulances and three plane ambulances to reach its citizens when traditional methods are not successful and stands as the only country to provide such assistance free of charge, according to its health minister.

It is no secret that the coronavirus has transformed insurance into an even more important subject globally.

The universal system aims to provide health care insurance to all citizens who are asked to pay a certain amount depending on income and number of house folk. For instance, those with an income of less than 2,943 liras ($421) have to pay 88.29 liras ($12.5). Some citizens and those younger than 18 are covered by the state.

As for health tourism, Turkey has at least 770 health care facilities awarded with international authorization certification and hosts foreigners, thanks to its reasonable pricing policies and geopolitical location.

It aims to provide service to about 1.5 million health tourists, and earn more than $10 billion. A call center working under the Health Ministry offers 7/24 service in six different languages — English, German, French, Arabic, Persian and Russian.

The country has 40 intensive care beds per 100,000 people, giving Turkey an edge over many other counties — such as the US, Germany, Italy, and France — in battling the virus for intensive care beds are of utmost importance for patients in severe conditions.

Aiming to be self-sufficient in every sector, Turkish research and development activities continue at the health front as well. The country recently announced 5,000 domestically built ventilators would be added to the inventory by May in a bid to ease the burden on the health care system battling the pandemic.

With over 1 million coronavirus tests already conducted, Turkey is among the top 10 countries that tested the most citizens. It relies on imported and locally made testing kits.

The status of coronavirus cases in Turkey was included in the “emergency” services in early April, meaning testing and treatment are offered free of charge to citizens in designated hospitals. Those without insurance can also benefit from free treatment.

“City hospitals” have become of the most important factors in the country’s fight against the virus. These large healthcare complexes are often composed of multiple hospitals that can host significant numbers of patients at the same time.

For instance, the Basaksehir Ikitelli Sehir Hospital is the latest one, with its ribbon was cut by President Recep Tayyip Erdogan. The complex has 2,700 beds and is equipped with high tech medical items, infrastructure and offers comprehensive treatment for all diseases.

After originating in China last December, the coronavirus has spread to at least 187 countries and regions. Europe and the US are currently the worst-hit regions.

The pandemic has killed over 247,500, with total infections exceeding 3.5 million, while more than 1.12 million have recovered, according to figures compiled by Johns Hopkins University in the US.