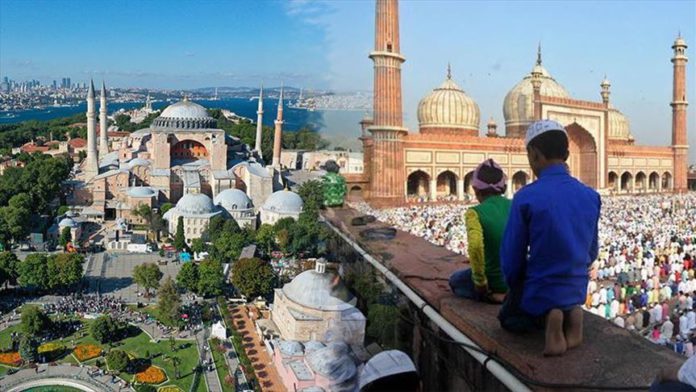 – The writer has a PhD in Theology from Aligarh Muslim University, India. He is currently a Professor in the Faculty of Islamic Studies, Social Sciences University of Ankara, Turkey.

Hagia Sophia Museum in Istanbul was reverted to its original position as a mosque decreed by the Honorable President of the Republic of Turkey, Recep Tayyip Erdogan on July 10, 2020. And the world witnessed its formal opening as a mosque on Friday, July 24, 2020. In the wake of this reversion, the world is raising a hue and cry over this change. Some have begun a nefarious attempt to equate the Babri Masjid conversion into a Hindu temple with the Hagia Sophia Mosque rehabilitation. The proponents of this equation argue that if a church could be converted into a mosque, a Hindu temple-turned-mosque could also be converted into a temple by an Indian court and government of India. This argument is nothing more than camouflage to mislead the masses, on the one hand, and misread the history, on the other. The historical perspectives of both; the conversion of Babri Masjid into a Hindu temple and the reversion of the Hagia Sophia museum to its original position as a mosque, should be looked at sincerely.

Babri Masjid was built by Mir Baqi, a Mughal army commander with the permission of Mughal emperor of India, Zahiruddin Babur, on a hilltop at Ayodhya (an Indian town) where there was no temple or any other construction in 1528-29 C.E. Its brief history was inscribed inside the mosque over its mihrab. It remained a mosque until December 22, 1949, where Muslims prayed five times a day and weekly special prayer on Fridays. On the night of Dec. 23, 1949, some miscreant Hindus placed an idol of Ram near the pulpit (minbar) of the mosque and announced the following morning that Ram’s idol appeared in the mosque hence it needed to be converted into Ram Temple.

This controversy reached the city court which immediately imposed a ban on both Muslims and Hindus to use Babri Masjid as a place of worship. Following the court order, the mosque was locked out the same day. In 1950 civil suits were filed by Hindus to allow them to perform puja (worship) in the mosque, and by Muslims to open the mosque for daily regular Islamic prayer. Jan. 26, 1986 the Ayodhya city court allowed the mosque to be opened but only in favor of Hindu devotees. This court order placed a total ban on Muslims to enter the premises of the mosque. The same year a Hindu outfit, Vishwa Hindu Parishad (VHP) constituted a committee for the construction of a Hindu temple at the very site of the five-century old Babri Masjid. In 1992 Babri Masjid was demolished, despite a Supreme Court order against it, under the obvious patronage of both the Congress Party and the Hindu nationalist party, Bhartiya Janta Party (BJP), which is now the ruling party of India.

Despite all these developments the court case concerning Babri Masjid continued until 2010 when Allahabad High court divided the Babri Masjid site land into two, one for the Hindus and other for the Muslims. It is to be borne in mind that the court could not cite any evidence of the place to be a Hindu temple before the construction of Babri Masjid.

Then, Muslims and Hindus reached the Supreme Court for the reversal of this verdict. The Supreme Court reversed the High Court ruling in 2011. The Supreme Court of India suggested the litigants settle the dispute out of court in 2017 but to no avail. Then again March 8, 2019, the apex court set up a mediation group under the leadership of a former Supreme Court Muslim judge, F. M. Ibrahim Kalifulla, but the court declared the mediation as “failed” on Aug. 2, 2019, and resumed hearing of the dispute, which was concluded Oct. 16, 2019.

The final court verdict was given on Nov. 9, 2019, in which the court did not say that the Babri Masjid site was originally a temple. The court simply ruled that the controversial site must be handed over to a committee formed to oversee the construction of the Hindu temple and that another piece of land was allocated to Muslims to build a mosque. The court in its judgment did not specify the reason for the Babri Masjid site handover to Hindus. The court indeed overlooked the bone of contention whether the disputed site was originally mosque or temple and declared arbitrarily that the mosque land in its entirety must be handed over to the Committee to supervise the task of temple construction.

Obviously, the apex court verdict does in a way represent the concept of justice, but it rather speaks volumes of political engineering, favoring the political masters, RSS, BJP, and VHP.

Byzantine Emperor Constantius built Hagia Sophia Basilica in 360 C.E. It was a wooden structure and served as a worshipping place for Christians of various denominations until 404 when it was burned down by rioters ignited by political conflicts in the royal family during the reign of Emperor Arcadius (395-408 C.E.).

Thereafter for around 10 years, there was no structure to be called as church or cathedral. Under the succeeding Byzantine Emperor Theodosios II (402-450 C.E.; popularly known as the infant emperor as he was merely a year old when crowned), Hagia Sophia cathedral was rebuilt in 415 C.E. It was once again torched in 531 C.E. in a revolt against Emperor Justinian I (527-565 C.E.) who rebuilt Hagia Sophia (the Divine Wisdom) Greek Orthodox church in 532 C.E. afresh. It remained intact for around 921 years as a church until 1453 C.E. when Ottoman ruler Sultan Mehmed II (1444-1446 C.E. and 1451-1481 C.E.) conquered Constantinople (now Istanbul). It is claimed by historians that Sultan Mehmed II immediately after the fall of the city converted the church Hagia Sophia into a mosque in 1453 C.E. This is a claim without documentary or circumstantial evidence.

This is true that Sultan the Conqueror entered the Hagia Sophia and asked some of his army men to call azan to declare the victory of Islam over Christian land. Historically, Hagia Sophia was not merely a worshipping place for Christians, it was also a place for the investiture of Byzantine emperors. In Hagia Sophia building the upper portion was exclusively used by the royal family and even the entrance through the ninth gate was the prerogative of the Emperors and their families throughout the centuries. Sultan Mehmed’s entry into the Hagia Sophia was symbolic i.e. declaration of his rule over the city. When the Ottoman army under its ruler/commander Sultan Mehmed II entered the city, almost the entire population including priests had fled the city which then gave a kind of deserted look. All the churches in the city were abandoned by the people and the priests. It was Sultan Mehmed II who persuaded the people from the neighboring towns and villages who had left Constantinople out of fear of their life to return with the assurance that their life, property, and honor would be protected. Many Christians who returned embraced Islam later. It was against this backdrop that Sultan Mehmed bought the Hagia Sophia building and the adjoining lands from his wealth. And immediately after he acquired legally the Hagia Sophia from their priests, Sultan declared it as an endowment (waqf or vakif). There is a waqf document preserved under the waqf foundation which proves beyond doubt that the Hagia Sophia Mosque was the waqf property donated by Sultan Mehmed II. Hagia Sophia remained a mosque until 1934 C.E. when Mustafa Kemal Ataturk, the first secular head of Turkey after the fall of Ottoman rule, declared Hagia Sophia a museum.

From the historical perspectives, it should be clear that the two cases have nothing to do with each other. Babri Masjid was a mosque right from the beginning after its construction in 1529 C.E. until it was demolished by RSS, BJP, VHP hooligans, and so-called political elites in 1992 C.E.

The case of Hagia Sophia is essentially different from the Babri Masjid case. Hagia Sophia was originally Hagia Sophia church abandoned by Christians and priests which was bought by Sultan Mehmed II as his personal property and handed over to the Waqf foundation in 1462 C.E. Under Waqf document the purchased property is declared as a mosque. It remained a mosque until 1934 when the then Turkish Cabinet converted it into a museum. On July 10, 2020 a Turkish court annulled the 1934 Cabinet decree that turned Hagia Sophia into a museum, paving the way for its use as a mosque.

Now any right-thinking and justice-loving person can weigh the position of Babri Masjid and that of Hagia Sophia. If the people still claim the similarity in the two cases, it is biased vested interest.

Sweden plans to kick off football leagues in June