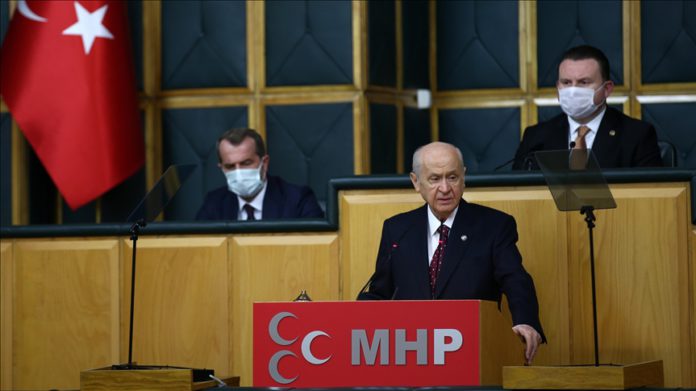 Turkey’s future is with a presidential system, the head of the Nationalist Movement Party (MHP) said Thursday.

In a meeting with MHP’s provincial heads, Devlet Bahceli said those who want an improved and strengthened parliamentary system should not waste time. He said the Turkish nation has made its decision and the curtain is closed.

“While many countries yield to despair in the face of the coronavirus outbreak, Turkey took precautions, became the pioneer and displayed exemplary behavior with its strong health infrastructure. It has come to the forefront especially with the equipment of city hospitals and our heroic struggle of the healthcare professionals.”

He went on to say that with its health diplomacy, Turkey lent a helping hand to other countries.

Bahceli also noted that neither US sanctions and the EU’s sanction threats nor Greek provocations will make Turkey kneel down.

Touching on the ruling by the European Court of Human Rights (ECHR) on Turkish opposition politician Selahattin Demirtas, Bahceli said: “We do not recognize the final verdict. We do not care. We cry out here that it is invalid in the national conscience. We reject this insult to the national will and Turkish courts.”

The ECHR on Tuesday ruled that the arrest of Demirtas in 2017 on terror charges violated his freedom of expression and right to participate in elections.

The co-leader of the Peoples’ Democratic Party (HDP) was being deprived of the right to liberty, security and freedom of choice, the ruling said.

In November 2016, Demirtas along with 12 HDP lawmakers were arrested on terror-related charges.

On the S-400 missile defense system that Turkey purchased from Russia, Bahceli said: “If we bought the S-400s, we will definitely use them.”

“Instead of putting them in hangars, we will deploy the batteries against hostile environments,” he added.

In April 2017, when its protracted efforts to buy an air defense system from the US proved fruitless, Turkey signed a contract with Russia to acquire the S-400s.

Turkey, however, stressed that the S-400 would not be integrated into NATO systems and posed no threat to the alliance or its armaments.

Bahceli also criticized a decision of the lower house of the Belgium parliament on Upper Karabakh.

“We tear up that decision criticizing Turkey,” he said.