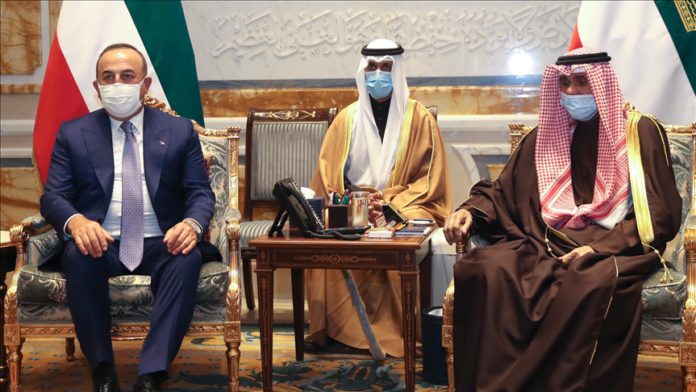 Thanks to Kuwait’s mediation, there is now a positive atmosphere in the Gulf region, the top Turkish diplomat said.

Cavusoglu congratulated Kuwait for its successful diplomatic efforts to resolve the Gulf crisis.

“We want a strong, unified and stable Gulf region. We will continue to work with the Gulf Cooperation Council. We will increase our cooperation in the fields of health and economy,” Cavusoglu said during the meeting.

“We had a fruitful meeting with Kuwaiti Prime Minister Sheikh Sabah”, Cavusoglu said on Twitter.

“We wish to work closely with the newly formed cabinet. We maintained our trade volume despite the pandemic. It is gratifying that Turkish construction companies undertake important projects in Kuwait,” he added.

Cavusoglu embarked on a three-day Gulf tour on Tuesday that will also include Oman and Qatar.

According to a statement by the Turkish Foreign Ministry on Monday, Cavusoglu “will hold talks with his counterparts and other high-level authorities” on the occasion of these visits.

“During these meetings, various aspects of our bilateral relations will be reviewed and views on current regional and international issues will be exchanged,” the statement said.

Cavusoglu is also scheduled to meet with Turkish business people operating in those countries.

Saudi Arabia, the UAE, Bahrain, and Egypt signed a reconciliation deal with Qatar last month to end more than three years of a rift that began in 2017 after the Saudi-led bloc accused Doha of supporting terrorism, an accusation vehemently denied by Qatar.

Russia says it follows US actions on Ukraine 'with great concern'