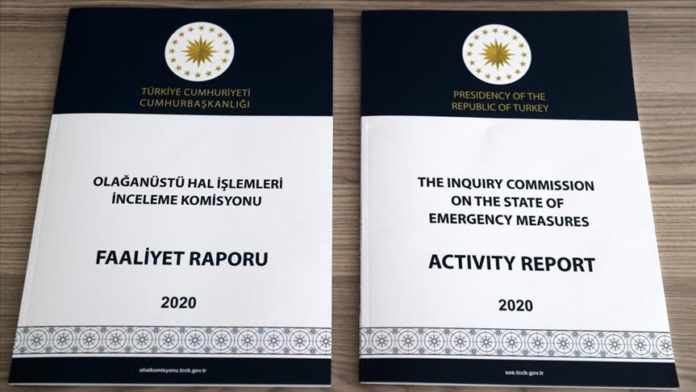 Turkey’s Inquiry Commission on the State of Emergency Measures released a compilation of works it has carried out during three-year activity period, including the data analysis system, evaluation criteria, decision samples, and detection of illegal activities of Fetullah Terrorist Organization (FETO) — the group behind the 2016 defeated coup in the country.

Activity Report 2020 said the commission is recognized as an effective law mechanism by the Constitutional Court and the European Court of Human Rights (ECHR).

According to the report, the commission formed a special data processing system for receiving applications, archiving, and examination procedures.

Information concerning the applications received from more than 20 institutions and organizations has been recorded in this system, it added.

The report indicated that certain activities carried out by the commission were presented to “many high-level delegations of the ECHR, Council of Europe, European Parliament as well as the representatives of the relevant institutions and media.”

It noted that the commission examines every case individually and renders a reasoned decision. Accordingly, applications of 1,116 people whose spouses’ applications were rejected due to their connection with FETO in line with the examinations carried out by the commission, have been accepted.

The report pointed out that efforts have been made to return the rights of the individuals victimized by FETO and individuals who were deceived by the organization through shared ADSL lines and use of ByLock, the terror group’s encrypted messaging app, on the GSM phone numbers which have been given to relatives.

It also detailed the secret structuring of FETO, stating that the secret service stands for activities carried out on behalf of the organization through infiltrating the most critical and operational organs of the Turkish state.

It is pointed out that in secret services, specially chosen members of the organization who will perform the instructions of Fetullah Gulen, the US-based leader of FETO, or the senior executives of the organization, are assigned. Instances for secret structuring were also included in the report.

Some 131,922 measures were taken, and 125,678 of them were procedures concerning the dismissal from public service, the report indicated.

Some 14,320 applications are still pending, which accounts for nearly 11% of the total number of applications.

The commission also issued a preliminary examination decision with respect to 3,520 applications which do not fall within the scope of its duties, the report added.

The report also said the Commission intends to conclude all application files whose examination process is ongoing within a period of one year.

Providing the criteria for the evaluation of the applications, the report included samples of acceptance and rejection decisions.

The commission was founded on May 22, 2017 to evaluate the applications related to those dismissed from their professions, students whose scholarships were cancelled, retired security personnel whose ranks were annulled, and institutions and organizations that were closed.

FETO and its leader Gulen orchestrated the defeated coup of July 15, 2016, which left 251 people martyred and nearly 2,200 injured.