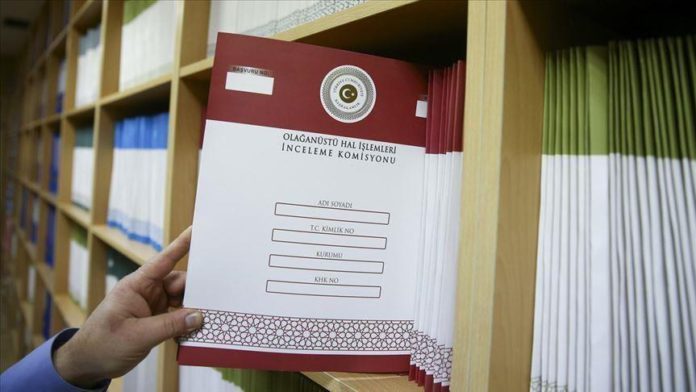 Turkey’s presidential commission on the state of emergency concluded 91% of applications concerning measures taken in the aftermath of the July 2016 coup bid, according to its latest announcement on Friday.

The Inquiry Commission on the State of Emergency Measures received over 126,000 applications on measures adopted under the state of emergency decree laws, such as the dismissal of public officials, scholarship cancellations, annulment of the ranks of retired personnel, and the closure of some institutions.

Since the defeated coup attempt, Turkish institutions, including the military, have been working to find and expel elements of FETO, the group behind the plot.

A total of 251 people were killed and nearly 2,200 injured in the July 15, 2016 coup attempt orchestrated by FETO and its US-based leader Fetullah Gulen.

The commission says it examines applications for links or contact with terrorist organizations or other entities listed by the country’s National Security Council as engaging in activities against national security.

In its announcement, the commission said the number of accepted applications stood at 14,072, while 101,058 were rejected and 11,544 more are pending.

It added that of the total applications it had accepted, 61 were for the reopening of organizations that were shut down after the coup attempt, including associations, foundations, and television channels.

“Accordingly, 91% of the total applications have been decided since the date of the beginning of the Commission’s decision-making process,” read its report.

To deal with these applications, data processing infrastructure was set up to electronically receive, archive, and examine them the commission said, adding that the system had recorded information from over 20 institutions and organizations.

For this, the commission employs some 240 professionals, including 75 rapporteurs — judges, experts and inspectors — in the application review process.

A total of more than 494,000 files, including personnel files transferred from their institutions, court files, and former applications, have been classified, registered and archived.

US: Biden hints at interference in 2023 Turkish polls