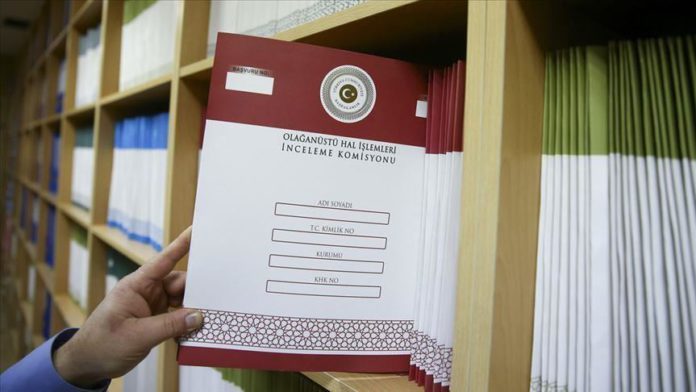 Turkey’s presidential commission on the state of emergency has concluded 87% of all applications concerning measures taken in the aftermath of the July 2016 foiled coup bid, according to its latest report released on Friday.

The commission took nearly 132,000 measures, including 125,678 dismissals from public service over links to the Fetullah Terrorist Organization (FETO), the terrorist group behind the defeated coup and a plot to infiltrate the Turkish state.

The applications were related to institutions and organizations that have been dismissed and closed under the state of emergency decree-laws, it added.

Of the total accepted applications, 60 are related to the reopening of organizations that were shut down, such as associations, foundations, and television channels, it added.

“Accordingly, 87 percent of the applications have been decided within a period of 33 months since the date of the beginning of the Commission’s decision-making process,” read the report.

A data processing infrastructure was set up to receive, archive, and examine applications electronically, the commission said, adding that information acquired from over 20 institutions and organizations was recorded in the system.

Some 250 staffers, including 80 rapporteurs – judges, experts, and inspectors – worked in the application review process.

A total of 490,600 files – including personnel files transferred from their institutions, court files, and former applications – were classified, registered, and archived.

The decisions of the commission are circulated to the institutions where the individuals last held office for the purpose of being notified, the report said.

The procedure of appointment of those whose applications were accepted is carried out by the institution where they last held office and, where relevant, the Council of Higher Education.

Within 60 days from the date of notification, an annulment action may be brought before the Ankara Administrative Courts determined by the Council of Judges and Prosecutors against the decisions of the commission and the institution or organization where the relevant person last held office, the report said.

The applicants can track their status on the commission’s website – ohalkomisyonu.tccb.gov.tr.

As an effective remedy, the commission delivers individualized and reasoned decisions as a result of speedy and extensive examination, the report said.

The commission conducts the examination in terms of membership, affiliation, connection, or contact with terrorist organizations or structures/entities or groups established by the National Security Council as engaging in activities against the national security of the state, it added.

In addition, decisions taken by the judicial authorities are monitored through the UYAP system.