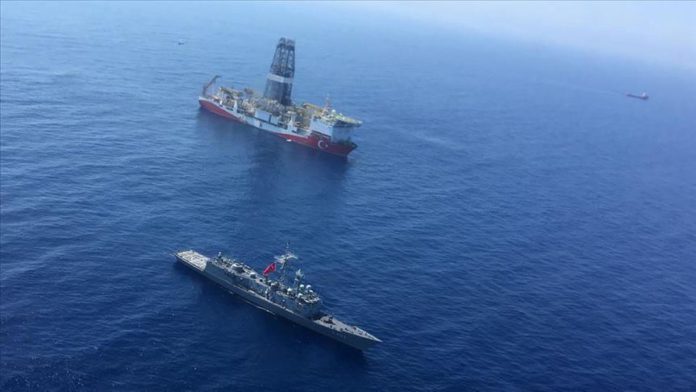 Turkey’s oil and gas exploration and drilling activities in the Eastern Mediterranean are based on a strong international legal footing, according to energy experts on Thursday.

As part of the country’s hydrocarbon exploration activities, Turkey announced the start of new seismic research activity with the MTA Oruc Reis seismic vessel in the Eastern Mediterranean via NAVTEX (navigational telex) on July 21, 2020.

In an exclusive interview with Anadolu Agency, the head of the Energy Law Research Institute, Suleyman Bosca said the rights of coastal states on continental shelves are a de facto incontestable and elementary right that does not necessitate any declaration.

“According to international agreements, coastal countries have continental shelves, which are defined as 200 nautical miles from its shore,” Bosca explained, adding that maritime jurisdiction zones pertaining to bilateral agreements as well as international customary practices are based on the international law of the sea.

He argued that in the current situation, the islands that belong to Greece are on the natural extension of Turkey and therefore cannot be considered a continental shelf.

He further contended that Greece’s stance also goes against the Lausanne Peace Treaty that affirms Turkey and Greece should equally benefit from the Aegean Sea.

Bosca said the areas that Turkey is focusing its studies on with the Oruc Reis are sectors where Turkish Petroleum was granted seven licenses, and which fall under the maritime zone pact between Turkey and Libya.

On Feb. 27, Turkey conveyed the agreed geographical coordinates to the United Nations (UN).

Last November, Turkey and Libya signed landmark pacts on military cooperation and boundaries in the Mediterranean.

The maritime pact, effective from Dec. 8, asserted Turkey’s rights in the Eastern Mediterranean in the face of unilateral drilling by the Greek Cypriot administration, while clarifying that the Turkish Republic of Northern Cyprus (TRNC) also has rights to the resources in the area.

“Greece acts in defiance of UNCLOS”

Professor Mehmet Efe Biresselioglu, the head of Sustainable Energy Division and Faculty member of Political Science and International Relations Department of the Izmir University of Economics, similarly attested that the region where the MTA Oruc Reis seismic vessel operates is not within the Greek Exclusive Economic Zone as defined by the UN regulation on continental shelves.

Contesting the Greek contrary declarations, Biresselioglu urged that Greece abide by the principle of ‘equitable sharing’ since it is a signatory of the United Nations Convention on the Law of the Sea (UNCLOS).

“The Greek claims over a continental shelf that covers tens of thousands of square kilometers are completely against the ‘equitable share’ principle of the UNCLOS of which Greece is a signatory state,” he said.

Biresselioglu argued Turkey’s stronger claim and said the boundary drawn based on the islands this close to the Turkish mainland is in defiance of Article 300 of the UNCLOS.

“Turkey on right side of International Law”

Oguzhan Akyener, the president of the Turkey Energy Strategies & Politics Research Center (TESPAM), argued that it was against international law to define continental shelves based on islets far away from the mainland.

He said the main criteria to delineate continental shelves are frontage lengths, distances from the mainland and location, which he said renders Greek claims null and void under international law.

Akyener emphasized that it is completely incoherent to raise claims of a continental shelf over the islands in question. “There is a high number of internationally legal conventions and resolutions for bilateral dealings between Greece and Italy, England and France, Nicaragua and Colombia, Libya and Malta, Tunisia and Italy, Papua New Guinea and Australia and many other cases as such,” he said.

Turkey relies on treaties like these in presenting and supporting its rightful claims and moreover the necessary initiatives have been taken and declarations have been made at the UN, Akyener said.

He explained that within this framework, a NAVTEX has been broadcast about exploration within a region of 2 kilometers from the Anatolian mainland in accordance with Turkey’s right to explore hydrocarbon resources.

“No matter how uneasy they are with Turkey’s latest move, the Greeks have their hands tied legally, militarily, economically and politically,” he said.

“Turkey will definitely not compromise on its rights nor will allow its powerful neighbors, such as Libya, to be bullied. Turkey is the strongest and legally most righteous state in the regions in every way,” he concluded.