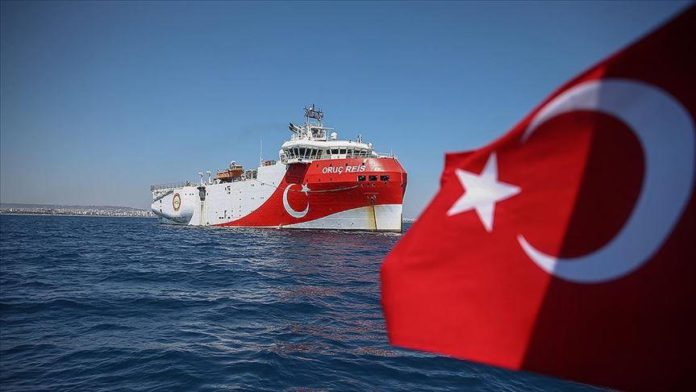 Speaking at the sixth Mediterranean Dialogue Forum organized by the Italian Foreign Ministry and the Institute for International Political Studies, Cavusoglu delivered messages on many issues, including relations with Europe and the US as well as the crisis in the Eastern Mediterranean.

Underlining that Turkey is ready to engage in dialogue with either France or Austria to resolve current problems, he criticized recent controversial moves by the French and Austrian governments targeting Muslim communities.

“Some populist politicians dare to define or interpret Islam for their interests, and this is unacceptable,” he said. “Redefining Islam is not the job of any politicians. It’s very clear in the Holy Quran.”​​​​​​​

Cavusoglu also slammed the Austrian government’s decision to ban what it described as ‘political Islam,’ saying such populist rhetoric was aimed at domestic political consumption.

“There is no political Islam. Islam is Islam, and Islam means peace,” he stressed.

Recalling that an article critizing French secularism was removed from the website of Politico Europe last month, he said he sees this as a “pure double standard.”

“Criticizing, attacking the Prophet, Islam is freedom of expression, but when we criticize any politicians in Europe, this is unacceptable,” he added. “When it comes to Europe, they are free to do anything for the sake of EU solidarity.”

Cavusoglu noted that Turkey is not perfect, adding: “That’s why we are focusing on the reforms, including judicial reform and the strategic human rights action plan.”

Turkey and France’s foreign ministers will hold a phone call on Dec. 8, Cavusoglu also announced during his speech, adding: “We will communicate on every issue, bilateral issues and also the other issues and differences.”

“Dialogue is the best way to understand each other,” he said regarding Turkey’s relations with European countries.

“The Eastern Mediterranean conference is a chance to establish a suitable environment for cooperation, and this is our proposal,” he said.

He said he expects the EU to “change their game as well.”

“Threatening Turkey and ignoring the rights of the Turkish Cypriots will not serve the interests of any EU, NATO or Mediterranean nation,” he told the conference.

Relations with the US

Answering a question on some reports in international media outlets saying US Secretary of State Mike Pompeo criticized Turkey over its purchase of Russian S-400 missile systems, Cavusoglu said he cannot quote anything from a closed-door meeting.

However, he noted that “We don’t agree on everything. That is true.”

“But nobody has the right to question Turkey’s NATO membership.”

Speaking on Turkey’s decision to buy the S-400 systems from Russia, he said it was not a choice but a necessity.

He also underlined that what needed to be also questioned was why NATO allies did not sell the Patriot defense system to Turkey when Turkey needed it the most.

Cavusoglu asked why no one is questioning the existence of Russian defense systems in other NATO countries, giving the example of Greece, which has Russian S-300 missiles.

He minister thanked Spain and Italy for deploying Patriot batteries in Turkey, pointing out that some other allies, including the Netherlands, Germany and the US, had withdrawn their batteries.