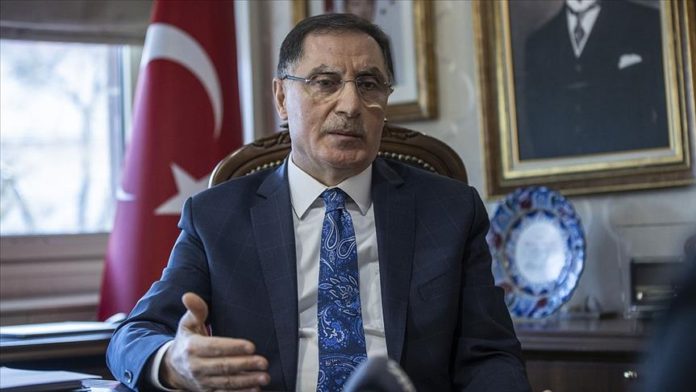 A longtime Turkish official on Wednesday remembered the unfolding of Turkey’s “disastrous” postmodern coup of Feb. 28, 1997, its repressive aftermath, and the lessons the nation has learned in the decades since.

Chief Ombudsman Seref Malkoc told Anadolu Agency that the coup was a process when public rights and freedoms were restricted and institutions protecting the public’s spiritual life were shuttered.

Malkoc, who at that time was a deputy for the Black Sea city of Trabzon for the Welfare Party and the Virtue Party – both of which were later ordered closed – decried the coup as a complete legal, political, religious, and political “disaster.”

He said that Turkey’s hundreds of years of historical experience and its society loyal to the law and morality helped Turkey get through this “mangle.”

“Remembering what happened at that time gives no pleasure to anyone. Even for those who experienced these pains, remembering that period is an agonizing subject,” he explained.

Society was damaged greatly by this, but later, the nation went to the ballot box and corrected many of the things that went wrong in 1997, he recalled.

The traces of that coup have been wiped away, and serious reforms have been made to the Constitution and laws, especially in the area of rights and freedoms, he said.

‘No one should disobey the law’

Malkoc said that all the rights that were restricted by the coup were later expanded under the leadership of current President Recep Tayyip Erdogan, whose Justice and Development (AK) Party came to power in fall 2002.

The coup, he said, “prevented some of the people in eastern and southeastern Anatolia from speaking their native language among themselves, considered a crime, forbade it. Now, one of the state TV channels broadcasts in Kurdish.”

The public did not have a harsh reaction to these injustices, but instead patiently and over time brought those who disobeyed the law to justice in line with the law, he said.

He also said that all those who organized the junta in the Turkish Armed Forces (TSK) at that time were tried and got the punishment they deserved.

‘Necmettin Erbakan gave the most important lesson to the junta’

Malkoc said the late Necmettin Erbakan, whose prime ministry the coup ended, gave the most important lesson to both the junta and society at that time.

When Erbakan’s Welfare Party was closed, Erbakan told a press conference that “society needs more peace every day” and that he wanted no one to take extreme measures, said Malkoc.

“If [instead] he came out and said, ‘this Constitutional Court decision is wrong, resist, act, demonstrate, oppose this lawlessness,’ and provoked his supporters and the Turkish people or led them to do wrong, what would Turkey be like now?

“I repeat the most important lesson that can be derived from this point of view, that no one should disobey the law. He may be wronged, he must seek his right, but when he seeks this right, he must seek it in legitimate ways and seek it within the confines of the law.”

In February 1997, the military ended the administration of Prime Minister Necmettin Erbakan amid concerns by generals about its alleged “Islamist” program.

Erbakan’s 1996 visit to Libya, his promotion of unity between members of the Developing-8 (D8) bloc of nations, and his decision to host religious figures for a Muslim holy month of Ramadan Iftar dinner were among the reasons that led to pressure by the military, which accused the prime minister of engaging in “reactionary activities.”

The military expressed its dissatisfaction on Jan. 31 by holding a “military parade,” which included tanks, in the streets of the neighborhood of Sincan in Ankara, the nation’s capital.

Following the parade, then-Deputy Chief of General Staff Gen. Cevik Bir said the event had been intended to “stabilize democracy.”

Bekir Yildiz, the mayor of Sincan, meanwhile, was dismissed from his post and arrested – along with nine others – after being accused by military authorities of “inciting” the public.

The meeting produced what would come to be known as the “Feb. 28 Memorandum,” which contained a list of resolutions by the Turkish military taken in response to what it called “rising Islamist ideology.”

The military then forced Erbakan to sign a slew of decrees, including a ban on headscarves, the shutting down of Quran schools, and the implementation of measures aimed at giving the military control over the news media.

On June 18, the military went even further, forcing Erbakan’s entire government to resign, leaving the premiership in Ciller’s hands.

Then-President Suleyman Demirel, who was not a member of any party, then asked Mesut Yilmaz, the leader of the liberal Motherland Party (ANAP), to form a new government.

In what has since been called Turkey’s “postmodern” coup, a new government was then unveiled, which took the reins of power from Erbakan. The new government included ANAP, the Democratic Left Party (DSP), and the Democrat Turkey Party (DTP).

DSP leader Bulent Ecevit became deputy prime minister in the new administration, which was then used to enforce the National Security Council’s orders.

Private schools and foundations with suspected links to religious or conservative groups were shut, while devout Muslims were largely marginalized from public institutions – including government agencies, state universities, the civil service, the judiciary and the military.

Decades later, in a landmark decision in 2018, a Turkish court sentenced 21 high-level officials to life in prison for their roles in the 1997 coup.

Sixty-eight other suspects in the case were acquitted.

The court accused Karadayi and Bir of “masterminding” the coup.

Many others who played roles in the coup were spared arrest – due to old age or health problems – but have nevertheless been barred from leaving the country.