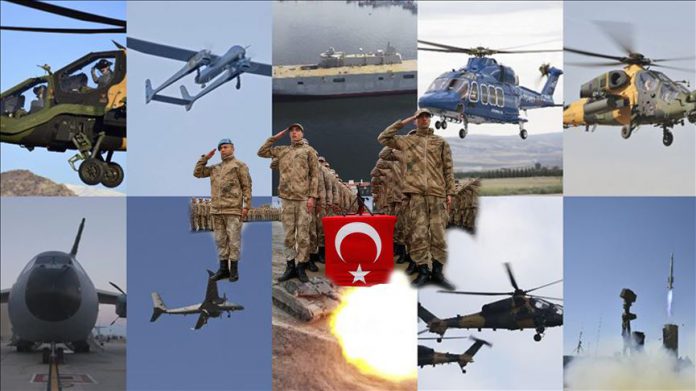 The writer is the director of the Security and Defense Research Program at the Istanbul-based think-tank EDAM.

There was never a dull moment for Ankara in its military affairs agenda in the year 2019. After all, Operation Peace Spring marked the first time that the Turkish Armed Forces (TAF) operated against the PKK terrorist offshoots in the east of the Euphrates in the northern plains of Syria. The S-400 procurement was, by far, the most sensational news in global weapons market. Turkey even combat-launched its indigenous ballistic missile, the Bora, during Operation Claw in northern Iraq. However, none of these developments offer the insightful hints about the Turkish administration’s defense vision for the 2020s as the latest Defense Strategic Plan 2019 – 2023.

Turkey’s main procurement body, the Presidency of Defense Industries (SSB – Savunma Sanayii Baskanligi) released the document in late 2019. The plan envisages the nation’s military roadmap until 2023, the centennial of the republic.

With many in-depth assessments available, the 2019 – 2023 plan deserves attention in one particular area. The document prioritizes managing technological transformation and building the required elite workforce to enable it. In other words, for the first time, an official release by Ankara primarily focuses on the broader defense eco-system with all the stakeholders involved, rather than on the defense sector itself with a purely industrial mindset.

In league with the new strategic plan, Turkey’s military and defense-technological uptrend hints at more aspirant capability development efforts in the 2020s. To grasp the new reality, one should glance at the bricks of this eco-system.

Turkey capitalizes on its warfighting capacity

The Turkish Armed Forces remain a battle-hardened, warfighting deterrent. Since 2016, Ankara has flexed its military muscles in Syria’s most dangerous operational environments. Having faced a hybrid warfare threat landscape on both sides of the Euphrates River against Daesh and the PKK, the Turkish Armed Forces have firmly relied on indigenous weaponry to a considerable level. Various conventional arms, ranging from multiple-launch rocket systems (MLRS) to unmanned aerial systems and precision air-ground munitions, Turkish defense industry has proved its strategic ability in supporting the nation’s military endeavors. The freedom of movement enabled by the national defense technological and industrial base (DTIB) loomed large as an integral part of Ankara’s diplomatic resiliency during Turkey’s cross-border campaigns.

‘Dronization’ has been the most crucial aspect of Turkey’s defense modernization in the 2010s. One could even claim that unmanned aerial systems were the most important enablers of Operation Euphrates Shield, Operation Olive Branch, and Operation Peace Spring.

With Bayraktar TB-2 and Anka lines registering key achievements, the next up for Ankara remains the development of more advanced systems to execute strategic missions. Akinci, thanks to its planned payload (up to 1.5 tons) and advanced sensors (including AESA radars), would be tantamount to a breakthrough in this respect.

Likewise, in the 2020s, Turkey is expected to operate its flagship amphibious assault vessel TCG Anadolu and its indigenous main battle tank Altay along with many other modern assets. In brief, the Turkish Armed Forces, as well as Turkey’s DTIB, are adopting a new, more ambitious outlook.

Despite the remarkable scorecard noted hitherto, Turkey also has to face and overcome significant challenges in the coming decades.

Firstly, although the Turkish DTIB has well grasped the physical aspect, namely unmanned systems, of next generation warfare, there is a long way to go with regards the cognitive layer revolving around artificial intelligence (AI) and autonomous weapon systems. In 2020, the Turkish administration is expected to release its national AI strategy document. One could only then be able to develop a better understanding of Ankara’s strategic intentions.

Secondly, there is the 5th-generation military aviation agenda still awaiting clarity. With the new U.S. National Defense Authorization Act (NDAA) in effect, it is highly likely that Turkey will not be able to receive its F-35 multirole stealth aircraft in the foreseeable future. The remaining 5th-generation airpower project, the MMU (Milli Muharip Ucak – the national combat aircraft), in cooperation with the British BAE systems, could start equipping the air force with combat-ready squadrons as early as the 2030s. At present, the Turkish Air Force operates the 4th-generation F-16s as the backbone of its doctrinal order of battle. Thus, in the 2020s, Turkey would need a feasible stopgap, either through an interim 4.5th-generation solution or a comprehensive F-16 modernization. An alternative way forward could be boosting the SAM (surface to air missile) capabilities to foster anti-access / area denial (A2/AD) posture while delegating air-ground missions in permissive operational environments to light attack aircraft (Armed Hurkus) and to UAVs with higher payloads and advanced sensors. Still, none of these alternatives would compensate for the deep-strike and network-centric warfare capabilities offered by the F-35.

Thirdly and finally, with the U.S. NDAA in effect, and considering the risk posed by the CAATSA (Countering America’s Adversaries Through Sanctions Act) sanctions a critical possibility, Ankara has to augment and diversify its international defense ties.

When it comes to very advanced weaponry, such as the ongoing air and missile defense project in cooperation with the EUROSAM and the 5th-generation aircraft project with the BAE systems, capable partners remain vital for Turkey. The burgeoning military cooperation with Ukraine, especially in view of the success of active protection systems development for armored platforms’ survivability against anti-tank guided missiles, sets a good example in this respect.

All in all, Ankara has been swiftly rising to a new league in designing, producing and using high-end arms, with recent years marking key achievements, of which the ‘dronization’ trend stands out as the most notable one.

The SSB’s new strategic plan has set the bar high. To have a clear idea about Turkey’s defense-technological future, one should expect Turkey’s first national AI strategy document in 2020. In the meanwhile, the trajectory of Turkey’s ties with the Western defense giants remains the most critical trend to monitor.