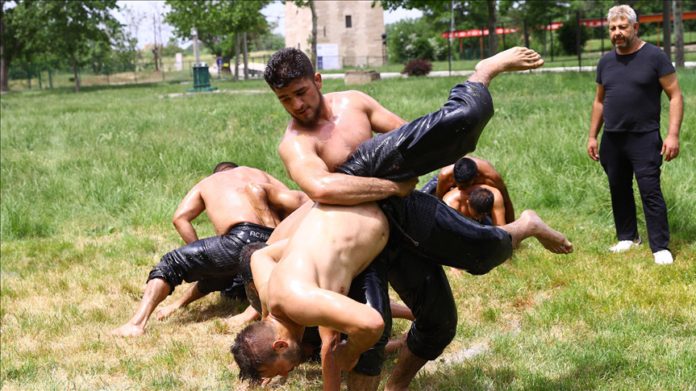 Turkey’s ancient Kirkpinar Oil Wrestling Festival that marks its 660th anniversary will start in the northwestern Edirne province on Friday.

About 3,000 wrestlers will participate at a field in Sarayici, which is one of Edirne’s most crucial recreational sites.

Thousands of fans from different age groups, cultures and regions visit every year to see wrestlers competing for the Golden Belt and the title of Baspehlivan (chief wrestler).

The wrestlers, who wear leather pants, rub olive oil on their bodies will tackle each other on grass fields and the last man standing will clinch the title.

The wrestlers from the southern Mediterranean coastal city of Antalya dominated the festival in last 10 years, excluding 2014 and 2016. Fatih Atli from Samsun and Recep Kara from Ordu claimed the title in 2014 and 2016, respectively.

Two-time Chief Wrestler Ismail Balaban from Antalya will not take part in this year’s festival, saying that he is not ready.

“There is also the risk of injury if I wrestle. I don’t want to disappoint spectators either. I will not be able to participate in Kirkpinar this year, ” he added.

According to the Turkish Ministry of Culture and Tourism, this festival originated in the 14th century Rumeli (southeastern Europe), and with its long celebrated history, it is one of the oldest wrestling festivals in the world.

Oil wrestling is a type of wrestling where the wrestlers wear leather pants tied with a rope at the waist and cuff, and clash on grass after being covered in olive oil.

The three-day event was added to UNESCO’s Representative List of the Intangible Cultural Heritage of Humanity in 2010 on behalf of Turkey.