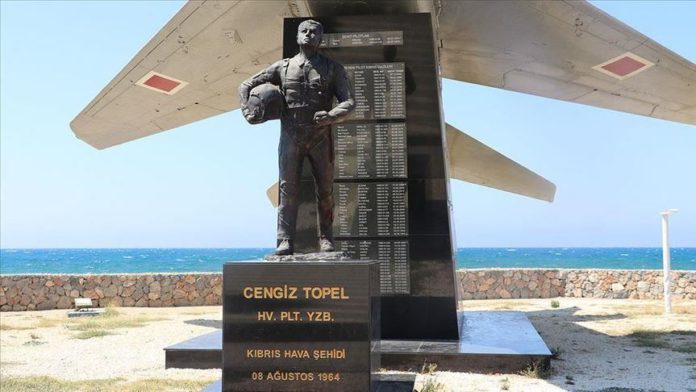 The first martyr of the Turkish Air Force, Pilot Captain Cengiz Topel, was remembered on Friday, 56 years after his plane was shot down on Aug. 7, 1964, during a warning flight on Greek Cypriot soldiers opening fire on Turkish civilians on the island.

Topel was among the Turkish civilians’ first line of defense against the Greek Cypriot soldiers, amid attacks that would escalate over the coming decade until Turkey’s peace intervention against a Greek Cypriot coup attempting to topple the internationally recognized government of the Republic of Cyprus.

Topel’s legacy lives on both in Turkey and the Turkish Republic of Northern Cyprus (TRNC), where parks, streets, museums and monuments are named after him as a national hero.

The Cengiz Topel Monument in the town of Lefke was inaugurated in 1990. It houses memorabilia of Topel, including original parts and a replica of his plane, photographs and a bust of Topel.

Coming from humble beginnings, Cengiz Topel was born on Sept. 2, 1934, as the son of a tobacco expert in Turkey’s northwestern province of Kocaeli before graduating from the Turkish Military Academy in 1955 and joining the Turkish Armed Forces.

Passionate about aviation since childhood, Topel was sent to Canada for training to become a pilot, after which he was stationed at an airbase in central Turkey in 1961 before becoming a captain two years later.

On Aug. 5, 1964, Greek Cypriots attacked the Erenkoy and Mansur regions with assault rifles from the sea, as well as with armor-reinforced land troops. They opened fire on Turkish towns and fishing boats on the coast.

After it became clear that the UN presence on the island would remain indifferent to the massacre, Turkey sent its first mission to the island on Aug. 7 with four aircraft.

Captian Topel was sent from Eskisehir in central Turkey to Cyprus on Aug. 8, 1964, as a commander of the four units. They were ordered to conduct low-altitude warning flights over the island as a deterrence against the Greek Cypriot forces’ attacks against their fellow Turkish islanders.

A parachute-clad Topel ejected from his aircraft, landing on a road near the Greek village of Peristeronori between the Turkish settlements of Lefke, Gaziveren, Elye and Camlikoy. He was captured by three Greek soldiers.

Topel reportedly kept the soldiers at bay until he ran out of ammunition.

Though it is not certain what happened to Topel while in Greek Cypriot prison, he did not emerge from the ordeal alive. He was allegedly killed by torture despite the 1929 Geneva Convention on the Treatment of Prisoners of War.

The Greek Cypriot side claimed that Topel had been wounded and died after being treated in hospital.

The body of Turkey’s first air martyr was buried on Aug. 14, 1965, in Istanbul following the funeral processions in Cyprus, Adana, Ankara and Istanbul.

Turkey has administered over 73.37M COVID-19 vaccine shots so far