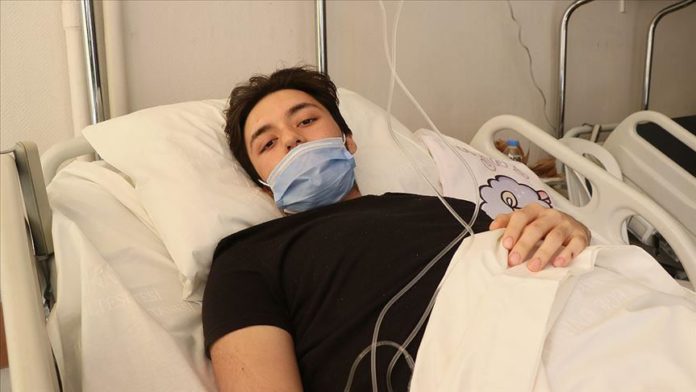 A young man who lost both his parents in Friday’s 6.6 earthquake that jolted Izmir recounted the horrific moments of the quake for Anadolu Agency.

“We lived there for six years. My mother, father, and I were there [home] during the earthquake. They were lost, I’m the only one left,” Arif Emre Nayman, a second-year engineering student, said Monday.

Sturdier houses need to be built, said Nayman. “While the houses next door were sturdy, ours was destroyed and very few people escaped from our apartment building,” he added.

Nayman said he was in his room next to his bed when the tremors struck, and a wall fell on his legs.

“Since my torso, arms and head were in a gap, I could call and shout. They found me in two or three hours and got me out,” he said.

So far, 91 people lost their lives and 106 people have been pulled from the debris as search and rescue efforts continue.

On Monday 3-year-old Elif Perincek was pulled from the debris nearly 65 hours after the quake.

Earlier, a 14-year-old girl was recovered from the rubble 58 hours after the tremor.

Turkey is among the world’s most seismically active zones as it is situated on several active fault lines. It has suffered devastating earthquakes in the past, including the 7.6 Marmara quake of 1999.