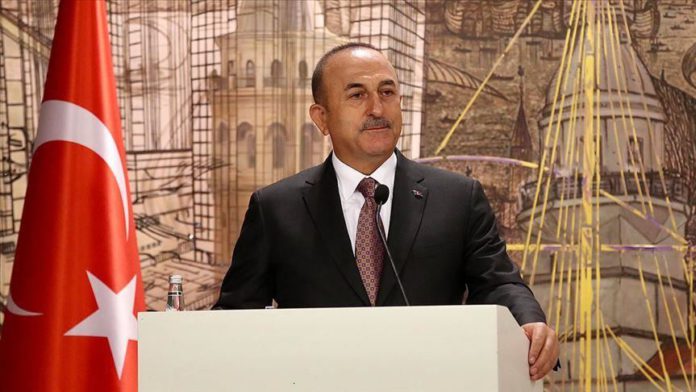 Turkey would be turned into a front line if the country was not strong in the field and at the negotiation table in Syria, Turkish Foreign Minister Mevlut Cavusoglu said Monday.

“If we weren’t that strong both at the negotiation table and on the field in Syria today, the front line would be our country itself. If today on the Libya issue we were not so active, the game of restraining Turkey in a small area in the Eastern Mediterranean would not be spoiled,” Cavusoglu told the 12th Ambassadors’ Conference held in the capital Ankara.

In its more than 30-year terror campaign against Turkey, the PKK — listed as a terrorist organization by Turkey, the US and the EU — has been responsible for the deaths of nearly 40,000 people including women, children and infants. The YPG is its Syrian offshoot.

Cavusoglu went on to say that the active policy Turkey follows prevents the activities of parties that are hostile to the country.

Turkey is a guarantor nation for the Turkish Republic of Northern Cyprus (TRNC) and has consistently contested the Greek Cypriot administration’s unilateral drilling activities in the Eastern Mediterranean, asserting that the TRNC also has rights to the resources in the area.

The decades since have seen several attempts to resolve the Cyprus dispute, all ending in failure. The latest, held with the participation of the guarantor countries – Turkey, Greece and the UK – came to an end without any progress in 2017 in Switzerland.

“In this chaotic environment, it is neither correct nor possible to follow a stable foreign policy stuck in the narrow patterns of the past,” Cavusoglu said, referring to rapid changes in global and regional dynamics.