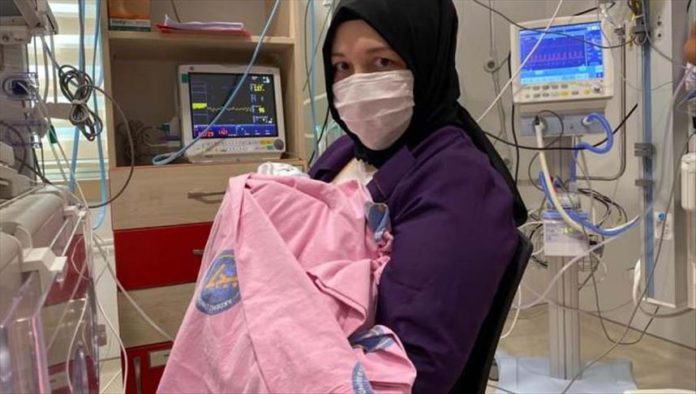 The world’s first baby born as a result of a uterus transplant from a cadaver is now healthy, a senior Turkish doctor said Wednesday.

Omer Ozkan from Akdeniz University in Antalya province told reporters that the baby is now more than 3.5 kilograms (7.7 pounds) and is doing well.

“We haven’t fully discharged [the baby] but a house close to the hospital was rented,” he said. “They come from time to time for tests. Weekly checks are done.”

Derya Sert, 23, gave birth during week 28 of her pregnancy June 4 to a baby boy who was named after the doctor who performed the transplant.

Sert shared a picture of her family with her newborn son with the media.

The transplant performed in August 2011 is recorded as the world’s first from a uterus recipient. Sert had not been able to bear children because she was born without a uterus.

Ozkan said Turkish doctors have helped other clinics across the globe with similar procedures and gathered findings that “could be a hope” for many women unable to get pregnant.

He added that after the birth, uterus transplants could be performed more frequently.