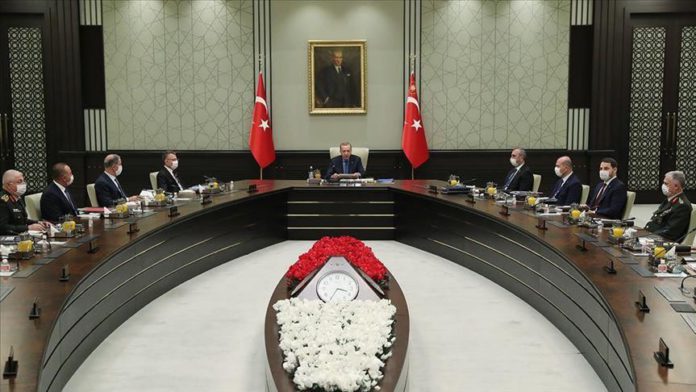 Turkey will continue protecting its rights and interests in the Mediterranean without any compromise, the country’s National Security Council said on Tuesday.

“Negative approaches of some actors, who met on the common ground against Turkey, regarding Turkey’s legitimate and legal steps in the Mediterranean were evaluated, and it is stated that protection of our country’s rights and interests in land, sea, and air will continue without any compromise,” the council, headed by President Recep Tayyip Erdogan, said in a statement issued following its meeting.

The council said Turkey will resolutely continue its fight against terrorism with its operations both inside and across the border.

“The commitment to continue multi-dimensional works to protect the territorial integrity of Syria, to clear the region of terrorist organizations and return of Syrians to their countries was reiterated,” it added.

Since 2016, Turkey has launched three successful anti-terror operations across its border in northern Syria to prevent the formation of a terror corridor and enable peaceful settlement by locals: Euphrates Shield (2016), Olive Branch (2018), and Peace Spring (2019).

Libya’s internationally recognized government, also known as the Government of National Accord, has been under attack by renegade Gen. Khalifa Haftar’s forces since April 2019.

The meeting also underlined the success of Turkey’s health, economy, food, technology, public order and security during the fight against the coronavirus pandemic.

The US, Brazil, Russia and several European countries are currently the hardest hit in the world.

The pandemic has killed over 376,800 people worldwide, with more than 6.31 million confirmed cases, while recoveries surpassed 2.72 million, according to figures compiled by the US’ Johns Hopkins University.

Turkey: Over 17,000 Turkish citizens in quarantine