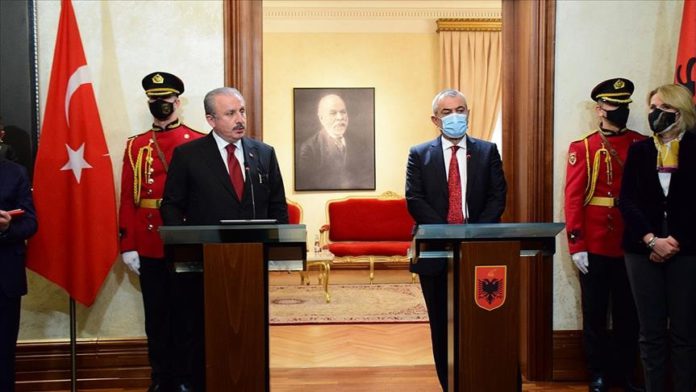 Turkey will do whatever needed to prevent the Fetullah Terrorist Organization (FETO) from harming its relations with Albania, the visiting Turkish parliament speaker said on Thursday.

“The Fetullah Terrorist Organization has some presence in Albania as well, like as in several Balkan countries… The terrorist group carries out its covered goals [worldwide] under the guise of education and health institutions, associations, and media,” Mustafa Sentop said, warning against the FETO threat in countries where it operates.

“I want to state that we will not let FETO poison the relation between the two countries [Turkey and Albania],” he vowed.

Sentop’s remarks came in joint news conference with Albanian counterpart Gramoz Ruci after the two officials held a one-on-one meeting and joined a meeting with delegations.

The Turkish parliament speaker, who is on an official visit to Albania’s capital Tirana, also addressed the economic and trade relations between the two countries.

Sentop stated that the current bilateral trade volume is around $0.5 billion and there is over $3.5 billion investment of Turkey in Albania, including contracting services.

“We are determined to raise our bilateral trade volume to around $1 billion in a few years,” Sentop said.

He also said that Turkey wants to boost its investments in Albania, especially in tourism sector.

On Turkey’s projected consulate general building in Vlore, Sentop said the necessary permits have been obtained for it to be opened.

“I hope it will be operational as soon as possible. Thus, an important point that will contribute to the development of tourism in the south of Albania will be established,” he added.

Also addressing the news conference, Ruci said that Turkey is a reliable partner of NATO and Albania.

The two countries are working intensively for an EU membership, he stated.

“We welcomed the signing of the joint political declaration. It carries our bilateral relations to a level of strategic partnership. Albania and Turkey are reliable partners of NATO with a joint goal of EU membership.”

Ruci added that integration into Europe is an irreversible and permanent destination for both countries.

Last month, Albanian Prime Minister Edi Rama paid a visit to Turkey. Turkish President Recep Tayyip Erdogan announced during a joint news conference with the visiting official that they signed a joint political declaration on the establishment of the High-Level Strategic Cooperation Council.