TurkishPress
Home Diplomacy 'Turkey will not compromise on rights in E.Med' 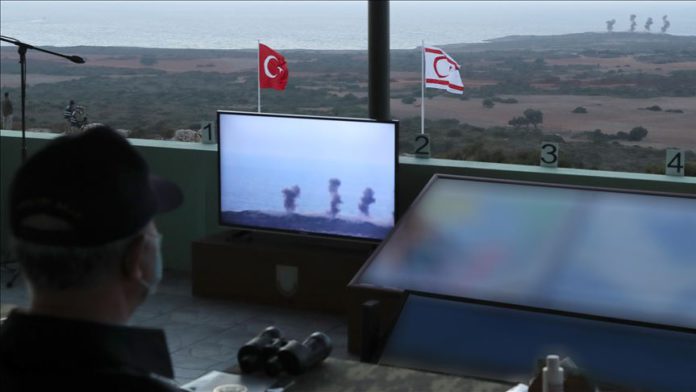 The Turkish defense minister said on Monday that “sacrificing our rights in the Eastern Mediterranean is out of question”.

“We have rights, concerns, and interests in the Eastern Mediterranean. Some countries are making counter moves and taking actions against them. We follow them with great patience,” Hulusi Akar said following the Distinguished Observer Day activities of the Mediterranean Storm — a five-day military exercise.

Stressing that Turkey will resolutely continue to do what is necessary to protect its rights, Akar said it is out of question to sacrifice and give up rights in the region.

“We are in favor of peace, dialogue, negotiations and solving the issue by political means,” Akar said, adding they will not allow any fait accompli and unfairness against the rights of Turkey and the Turkish Republic of Northern Cyprus (TRNC).

Underlining the importance of conducting military exercises, Akar congratulated all personnel who successfully took part in the exercise.

The armed forces of Turkey and the TRNC started joint military exercises in Northern Cyprus on Sept. 6.

The drill in the Turkish Republic of Northern Cyprus, the Martyr Capt. Cengiz Topel Mediterranean Storm Exercise, was named after a Turkish Air Force pilot who was martyred during the conflict on the island in 1964.

Amid tensions over the Mediterranean territory and energy exploration, Turkey has repeatedly stressed its willingness to start negotiations without preconditions, in contrast to Greece’s refusal in recent weeks to enter dialogue through both NATO or the EU.

On Sunday, Greece’s prime minister said he is ready to talk to Turkey’s President Recep Tayyip Erdogan if tensions between the two countries eased.

The country has also said energy resources near the island of Cyprus must be shared fairly between the Turkish Republic of Northern Cyprus and the Greek Cypriot administration.