TurkishPress
Home National 'Turkey will not bow down to colonialists in E.Med' 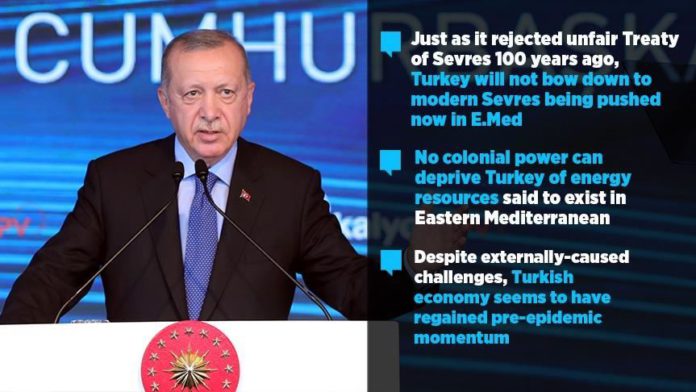 As it turned back the 1920 Treaty of Sevres, meant to box in and hold back the Turkish nation, Turkey will do the same to efforts to restrict it from energy resources near its shores, vowed the country’s president on Wednesday.

“Just as it rejected the Treaty of Sevres 100 years ago, Turkey will not bow down to the modern Sevres being pushed on it in the Eastern Mediterranean,” Recep Tayyip Erdogan said in the Turkish capital Ankara.

Speaking at a solar energy firm, Erdogan said no colonial power can deprive Turkey of the energy resources said to exist in the region.

Turkey has charged Greece, France, Egypt and other countries with trying to illegally deprive it of Mediterranean energy resources and box it in, even though it has the largest coastline on the sea of any country.

In the wake of World War I, the Turkish War of Independence pushed back Sevres, a pact meant to liquidate the Ottoman Empire and all but abolish Turkish sovereignty, in favor of the 1923 Treaty of Lausanne.

Erdogan added that Turkey’s struggle on various fronts from the Eastern Mediterranean to Libya is a struggle for the future, besides a fight for the country’s rights.

Turkey: Vehicle registrations up by over 68% in October