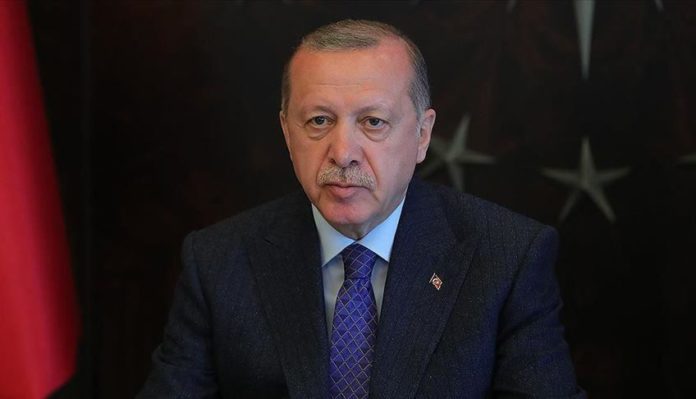 Terrorist groups are trying to exploit Turkey’s preoccupation with the coronavirus pandemic to step up attacks both within Turkey’s borders and beyond, Recep Tayyip Erdogan said in a televised address following a Cabinet meeting in Istanbul.

“This attitude alone is enough to show how far the terrorist group is from humanity,” he said.

Erdogan said the Turkish Armed Forces are pursuing and neutralizing terrorists non-stop, adding that its operations across the border also continue without interruption.

“We closely monitor every step of members of the terrorist group operating in a wide area in northern Iraq and Syria.”

He stressed that Turkey immediately neutralizes members of the terrorist group trying to infiltrate secured areas in Syria.

Since 2016, Turkey has led a trio of successful operations across its border into northern Syria to prevent the formation of a terror corridor, enable peaceful settlement by locals, and protect civilians from attacks: Euphrates Shield (2016), Olive Branch (2018), and Peace Spring (2019).

“We invite countries that have influence in the region to comply with our permanent agreements, to keep the terrorist group outside the determined borders, and to prevent regime attacks,” Erdogan added.

Erdogan stressed that unfortunately no country is “fully fulfilling its promise” in this regard.

If those who support the terrorist group and regime cannot control them, he said, with its own Turkey will bring them to their knees.

Idlib falls within a de-escalation zone laid out in a deal between Turkey and Russia in late 2018 and subsequent cease-fires. The Assad regime and its allies, however, have consistently broken the terms of the cease-fires, launching frequent attacks inside the zone.

Erdogan also said Turkey is determined to continue supporting Libya’s legitimate Libyan government to transform the area into a region of peace.

“The safety of Libya and the peace and well-being of the Libyan people are the key to the stability of all North Africa and the Mediterranean.”

He also said thanks to Turkey’s support for the legitimate government the putschist Khalifa Haftar is losing ground.

Countries that provide him unlimited financial support and weapons will not be enough to save Haftar, who also faces opposition from locals in the lands he occupies with every step he takes, said Erdogan, adding: “Hopefully, we will soon receive new good news from Libya.”

The Libyan Army has recently made gains against Haftar’s militias, which are supported by France, Russia, the United Arab Emirates, and Egypt.