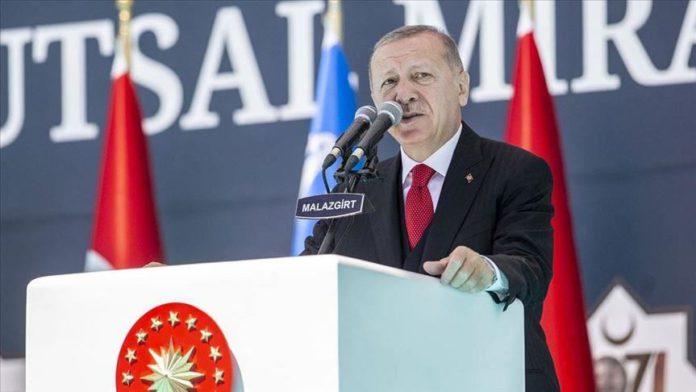 Turkey will take whatever belongs to it in the Mediterranean, as well as Aegean and the Black Sea, said Turkey’s president on Wednesday, speaking at a ceremony marking a key Turkish military victory nearly a millennia ago.

“Turkey has no designs on any other country’s lands, sovereignty, or interests, but it will never make concessions on what rightfully belongs to it,” said Recep Tayyip Erdogan at an event marking the 949th anniversary of the Battle of Manzikert (Malazgirt) in Mus, eastern Turkey.

Turkey urges everyone to avoid making missteps which could lead to their destruction, Erdogan added, speaking amid disputes with Greece on Turkey’s sovereign rights over maritime territory and energy resources.

Those unworthy of even the Byzantine heritage today commit injustices and piratical moves counting on the support of Europeans, which shows that they have failed to learn from history, Erdogan said.

The comments follow Turkey’s major natural gas discovery in the Black Sea, and the ongoing conflict in the Eastern Mediterranean with Greece.

Erdogan announced on Friday that Turkey has found some 320 billion cubic meters of natural gas reserves after its drill ship Fatih started work on July 20 off the Black Sea coast.

The ceremony Erdogan spoke at commemorated the Aug. 26, 1071 victory of Selcuk Sultan Alp Arslan on the plain of Manzikert – present-day Mus, eastern Turkey – accelerating the decline of the Byzantine Empire and leading to more Turks settling in the region, paving the way for both the Ottoman Empire and the modern Republic of Turkey.

During a Tuesday meeting with German Foreign Minister Heiko Maas seeking to meditate the Mediterranean dispute, Turkish Foreign Minister Mevlut Cavusoglu expressed a willingness to engage in dialogue, but also objected to Greek lawlessness and raising tensions in the region.

Before Maas’ visit, Turkey and later Greece sent out conflicting alerts on military exercises in the Mediterranean.

Ankara has also said energy resources near Cyprus must be shared fairly between the Turkish Republic of Northern Cyprus (TRNC) – which has issued Turkish state oil company Turkish Petroleum a license — and the Greek Cypriot administration of Southern Cyprus.

Erdogan has said the only solution to the dispute lies through dialogue and negotiation, urging Athens to respect Turkey’s rights.