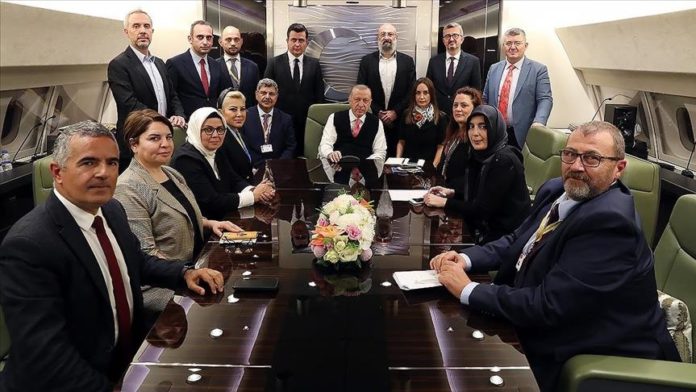 “There is no stepping back from it,” he said in response to a question on a return flight from the G20 Leaders’ Summit held in Rome, Italy.

He called on NATO ally US that it “should not support terrorist organizations.”

On his meeting with US counterpart Joe Biden on the sidelines of the G20, Erdogan said they discussed the procurement of F-16 fighter jets.

“I didn’t witness any negative approach,” he said of the meeting held on Sunday, adding that he hopes to conclude the “sensitive issue.”

He said Turkey and the US agreed to focus “more intensely” on the economic ties, and discussed cooperation in Afghanistan, Syria, Libya, and the Eastern Mediterranean.

Erdogan added that he told the US and French presidents how establishment of a base in Alexandroupoli, Greece near Turkish border “seriously disturbs” Turkey.

Earlier, the Turkish president said the US proposed the sale of F-16 fighter jets as compensation for Turkey’s payment for the F-35s.

In 2019, Washington announced that it was taking Turkey out of the F-35 stealth fighter jet program over Ankara’s purchase of the S-400, a Russian defense system it bought after its efforts to buy US Patriot missiles were rebuffed.

The US claimed the Russian system posed a safety risk. Turkey, however, stressed the S-400s would not be integrated into NATO systems, and thus pose no threat to the alliance or its armaments.

Ankara also repeatedly proposed setting up a commission to clarify the issue.