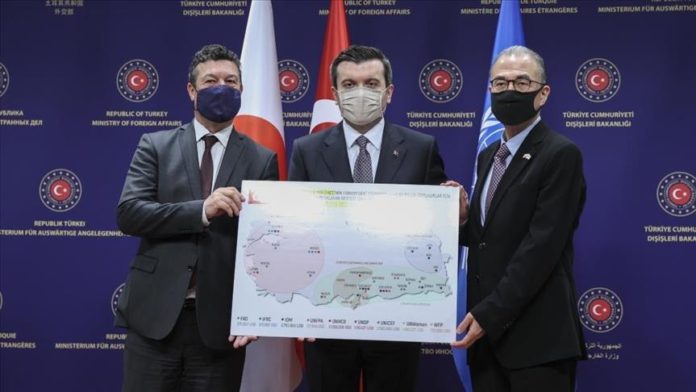 Turkey’s deputy foreign minister on Tuesday praised Japan for allocating $14 million in a new assistance package for the protection of displaced Syrians in Turkey amid the coronavirus pandemic.

Kiran said that Turkey enjoyed deeply-rooted and perfect relations with Japan, and economic cooperation has been substantially increased in the past years.

Noting that the COVID-19 outbreak was yet another indicator of strong ties, Kiran said Turkey welcomed the financial aid from Japan.

Although it has been a decade since the bloody civil war erupted in Syria, the crisis still stands as a humanitarian tragedy requiring an immediate response from the international community, according to the Turkish official.

He noted that Ankara dispatched aid for 9 million Syrians living in Turkey and their homeland and Ankara has spent more than $40 billion, most of which was funded by national sources.

Turkey has opened its doors for people struggling to protect their lives, he said, and this is part of its foreign policy based on humanitarian values.
Stressing that the $14 million would be used to protect Syrians amid the pandemic, he encouraged international actors to put more effort into creating a healthy environment essential for the safe and voluntary return of Syrians in Turkey.

Suzuki said Japan’s assistance to Turkey for Syrian refugees had reached $570 million, and it was by far higher than any other non-NATO country.

He noted that the assistance’s objective was to ease the burden of Turkey, and Suzuki hopes all relevant parties play a constructive role in better humanitarian conditions for Syrians and advance the political process.

Leclerc reiterated that Turkey had hosted more refugees than any other country for the past seven years and most displaced Syrians were living in Turkey. He said the world should be aware that some have been living in Turkey for 10 years.

Syria has been embroiled in a civil war since early 2011 when the Bashar al-Assad regime cracked down on pro-democracy protests with unexpected ferocity.

For the past 10 years, hundreds of thousands of people have been killed and more than 10 million displaced, according to UN officials. Turkey currently hosts nearly 3.7 million Syrians under the status of people under temporary protection, making it the world’s top refuge-hosting country across the world.

US executes 2nd inmate this week after 17-year hiatus