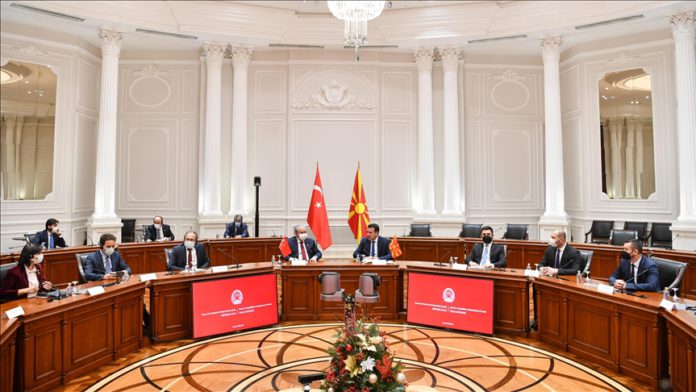 Speaking to Anadolu Agency, Sentop evaluated his official visit to the capital Skopje.

He said that economic goals have been set and serious steps have been taken regarding the future relations of Turkey and North Macedonia.

Updating the free trade agreements was among the topics they talked to during the visit to improve the economic ties.

“There is a study conducted on this subject. This is something that will increase economic relations and the size of our trade volume.

“Besides, Turkey-based business people here are very important investments and operations. In the process regarding the latest natural gas distribution, two Turkish companies have reached the final stage.

“There are many important investments like this. The prosperity and development of North Macedonia and the creation of employment for the people here is something we also desire. We as Turkey desire to support the development of friendly countries especially in economics,” said Sentop.

FETO in Balkans and North Macedonia

Sentop said they knew that the Fetullah Terrorist Organization (FETO), the terror group behind the 2016 defeated coup attempt in Turkey, was also operating some of its institutions in the Balkan countries and North Macedonia.

“Turkey has faced a coup attempt on 15 July. Turkey has largely completed its fight against FETO within its territories. However, we know that this organization poses a security risk in every country in the world where it operates. We have stated that in some countries of the world, FETO has made attempts such as coup preparations and coup attempts.

“In the countries where this organization is active, more or less, they have a potential that could harm the political power and the functioning of politics and government. Therefore, we do not submit a request for Turkey.

“In the meantime, we made a friendly warning about the security of North Macedonia. This organization needs to be eradicated from every place where it operates. We have once again pointed out the importance of ending FETO activities in North Macedonia, as in all countries, and purging them from the country,” said Sentop.

FETO and its U.S.-based leader, Fetullah Gulen, orchestrated the defeated coup of July 15, 2016, which left 251 people martyred and nearly 2,200 injured.
Ankara accuses FETO of being behind a long-running campaign to overthrow the state through the infiltration of Turkish institutions, particularly the military, police, and judiciary.

Sentop emphasized that Turkey has put forward a different foreign policy under the leadership of President Recep Tayyip Erdogan for a long time.

“A foreign policy perspective that prioritizes people and humanitarian aid. In this regard, the activities of the organizations such as Turkish Cooperation and Coordination Agency (TIKA), Yunus Emre Institue (YEE), Presidency For Turks Abroad And Related Communities, and General Directorate of Foundations are important.

“I see that they have become major brands in Turkey. We witnessed many beautiful efforts by them in North Macedonia, and we observed the satisfaction. These projects will continue, I’m sure of that,” said Sentop.

Sentop, during his visit to Skopje, met his counterpart Talat Xhaferi and Prime Minister Zoran Zaev, as well as President Stevo Pendarovski.

The Turkish speaker also inaugurated the exhibition, The Historical Adventure of Turkish Archery, organized by Turkey’s YEE and Archers Foundation.