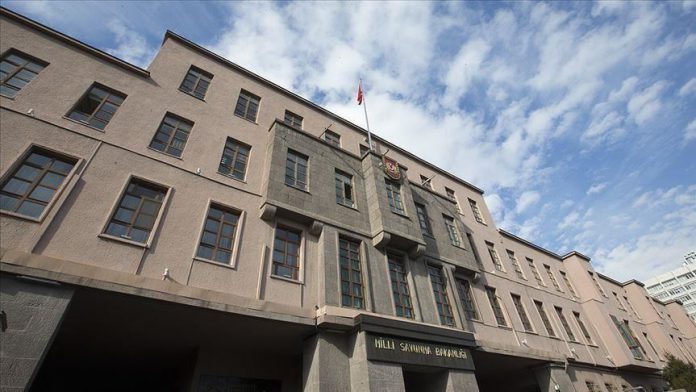 Turkey is the last wall standing between Europe and terrorism, the country’s Defense Ministry said on Sunday.

“Turkey protects not only its own borders, but also the borders of NATO. Turkey’s security is the security of all of Europe, including NATO,” the ministry said in a statement.

Turkey, as the last wall between Europe and terrorism, “is the front country in the fight against terrorism,” it added.

The statement decried the resolution by the U.S. House of Representatives recognizing Armenian claims about the 1915 events during the Ottoman era and the French parliament’s resolution on Turkey’s Syria operation.

“We condemn the US House of Representatives, which approved the alleged Armenian genocide and the French National Assembly, which issued support statements by defining the terrorist organization PKK/YPG as ‘allies’.

“We invite them to common sense and we hope that they correct these historical and grave mistakes as soon as possible,” the statement urged.

It said that the U.S. resolution on Armenian claims and a bill backing sanctions on Turkey contradict the Ankara-Washington deal reached on Syria and the spirit of NATO alliance.

The ministry also said the French parliament’s resolution on Turkey’s Syria operation is “nothing but an attempt to distort the truth from the world public opinion, especially the French people”.

The French Senate and National Assembly Wednesday approved resolutions condemning Turkey’s Operation Peace Spring in northern Syria — launched on Oct. 9 to eliminate the terrorists from the east of the Euphrates River in order to secure Turkey’s borders, aid in the safe return of Syrian refugees, and ensure Syria’s territorial integrity.

The ministry pointed out the serious Daesh/ISIS and the PYD/YPG/PKK threats targetting Turkey from the east of the Euphrates and recalled that Turkey has been sharing views on how to eliminate these threats.

“As a country of nearly 70-year NATO member, Turkey’s priority has been to eliminate the threat of terrorism by acting together with its allies. […] However; although agreement was reached on many issues, final agreement could not be reached, and unfortunately, Turkey has been left alone in the fight against terrorism.

The ministry recalled that Turkey’s Operation Peace Spring was being carried out in accordance with international law, Article 51 of the UN Charter and UN Security Council resolutions on fight against terrorism.

Despite all the efforts in fight against terrorism and providing peace in the region, the ministry said Turkey has been subjected to a serious disinformation campaign based on lies and biased reports such as the baseless and false reports about the use of chemical weapons during its operations in northern Syria.

On Oct. 22, Turkey also reached an agreement with Russia on a 10-point plan to force the YPG/PKK group to withdraw from the planned terror-free zone.

NATO chief Jens Stoltenberg welcomed these agreements in a recent interview with the German weekly Bild am Sonntag and underlined that there has been progress in reducing tensions and working toward a political solution.

In its more than 30-year terror campaign against Turkey, the PKK — listed as a terrorist organization by Turkey, the U.S. and the European Union — has been responsible for deaths of 40,000 people, including women, children and infants. The YPG is the PKK’s Syrian offshoot.