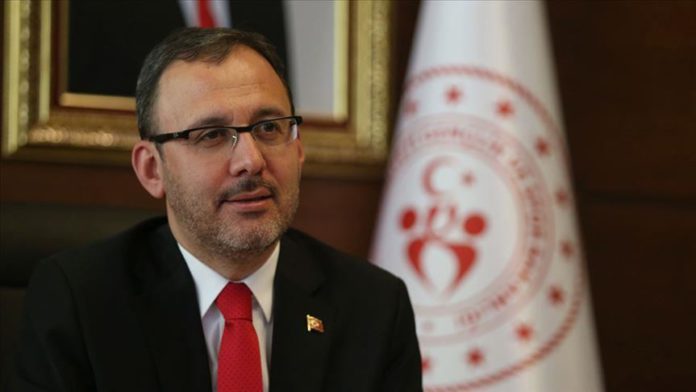 Turkey has been focusing on a policy to produce many more star players in sports branches including football and basketball.

Turkish Youth and Sports Minister Mehmet Muharrem Kasapoglu said late Friday that Turkey should profit its massive young population, which is 20 million, to bring in many successful athletes like NBA player Cedi Osman.

Referring to this youth population, Kasapoglu said that Turkey has to discover new young talents and encourage many others for sustainable development in sports.

“We care about a policy for domestic and national production. Of course, we respect successful foreign athletes but we also have remarkable talents [in the field of sports],” Kasapoglu said.

“You [Cedi Osman] are representing us abroad in an honorable and successful way. Why don’t we have more Cedi Osmans? It’s our goal. In football, we have successful compatriots playing in Europe now. We should have more [successful] of them,” he stated.

North Macedonian born Osman, 25, joined the Cavaliers in 2017 as the Turkish international is currently spending his third season in this franchise.

Before the Cavaliers, he played for a Turkish powerhouse, Anadolu Efes.

This season Osman averaged 11 points, 3.6 rebounds, and 2.4 assists per game in the Cavaliers.

Kasapoglu said that Turkey offers all opportunities to youngsters in the field of sports with nationwide superior sports facilities such as pools, tennis courts, and newly built modern stadiums.

In addition to the sports grounds, Turkey has a talent scout project in every sports branch as the country applies it to elementary school students to discover promising athletes.

He added that this year’s viewing should have been done in March but it had to be postponed to 2020 summer amid coronavirus pandemic.

Kasapoglu also said that as part of the 10,000 basketball hoops project, Turkey will install a great number of hoops and give basketballs to all the schools to encourage youth to play this game.

Kasapoglu added that he wants to give 1,000 basketballs as a gift to the people that Osman determines.

Meanwhile, Osman said that the Turkish national basketball team has a big change to be in the 2020 Tokyo Olympics, which will be held next year due to the virus.

Osman said that Turkey will combine its golden generation and experienced players for the Olympics’ qualifiers in Canada but the team needs patience and time to play in harmony.

“I believe we will be in better levels [in tournaments]. We have more chance in Canada. I believe in myself and my teammates much. We are a talented and young team,” Osman said.

The Cavaliers players added that Turkey will bag the ticket for Tokyo 2020.

The Turkish basketball team will face the Czech Republic and Uruguay in Group B in the FIBA Olympic Qualifying Tournaments 2020 in Canada.

In this tournament in Victoria, Turkey, Czech Republic, Uruguay, Greece, China and hosts Canada will compete for Tokyo 2020 berth. Only one team among these will qualify for the Olympics.

Greece, China, and Canada are the competitors in Group A. The winners in these groups (A and B) will play to qualify for the Olympic Games.

There are 24 teams in these four cities but only four will appear in the next year’s Olympics.

Each tournament will host two groups of three teams, Group A and Group B.

*Writing by Can Erozden and Muhammed Enes Calli