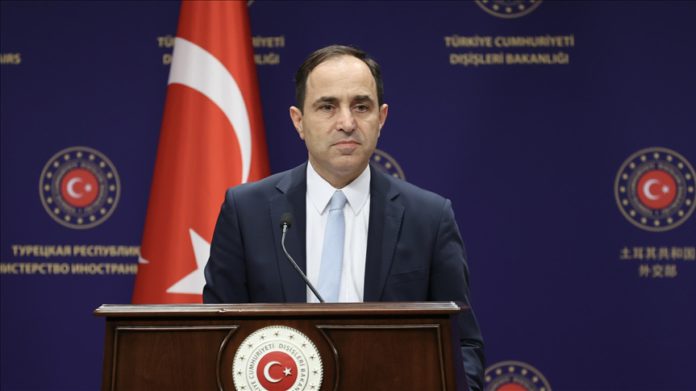 Turkey pledged on Friday not to remain silent on Greece’s violation of the requirements of a longstanding agreement between Ankara and Athens that makes international waters in the Aegean Sea off limits to military training during the high tourism season.

Foreign Ministry spokesman Tanju Bilgic underlined Turkey’s compliance with the 1988 Athens Memorandum of Understanding by not conducting naval drills in the Aegean from June 15 to Sept. 15.

He stressed that Greece did not change its behavior despite Turkey’s warnings.

Turkey is committed to the Athens Memorandum of Understanding but should not be expected to watch the Greek side’s violation of the deal with its hands tied, Bilgic said.

He added that Turkey had previously voiced its readiness multiple times to reciprocally lift the long-term drill zones in the Aegean.

Bilgic added that Turkey underlined at a second conference in Berlin on Libya that the country would not allow its trainers and advisers in Libya to be equated with illegitimate mercenaries.

Noting Ankara’s support for the political process in Libya, Bilgic said the countries in the conference had reached agreement to a considerable extent.

He noted that Turkey voiced concern on some of the articles that contradict the facts on the ground, resulting in the addition of a clause to the memorandum that differentiated Turkish trainers and advisors from mercenaries in the North African country.