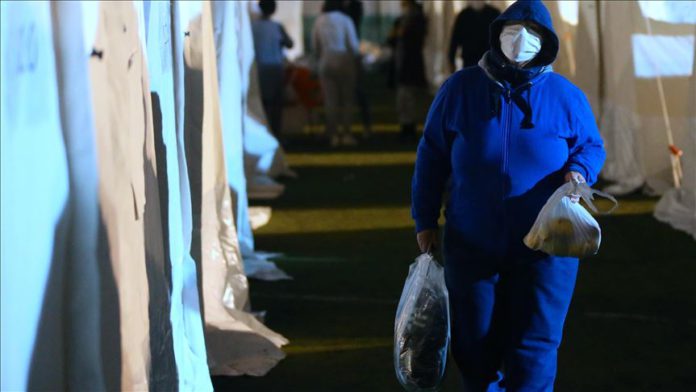 Volunteers in western Turkey are on the streets trying to help the victims of a recent powerful earthquake in the region.

While rescue efforts continue in the rubble of collapsed buildings in Izmir province, victims whose homes were destroyed or damaged spent the night in tents as relief groups including the Turkish Red Crescent (Kizilay) and Turkey’s Disaster and Emergency Management Authority (AFAD) rushed to their aid.

Speaking to Anadolu Agency, 50-year-old Izmir resident and taxi driver Mustafa Demirkan said the government and people stood together to alleviate the grief of the victims.

“We prepare hot meals with our own means for 100 people. We set up a bench in the public garden and try to reach earthquake victims in their tents. As a group, we prepare two hot meals a day,” Demirkan said.

Solidarity is a hallmark of Turkish culture, Demirkan said. “Breaking your bread with others is a beauty that comes from our culture. Anatolian people break bread with others. We’re going through tough times and doing something that is in our genes. We’ll overcome these tough days by sharing.”

Meanwhile, restaurant owner Onur Elmali said he had distributed a thousand food packets to victims staying at local parks since the earthquake erupted on Friday.

Explaining that they prepared the food and drink packs in their restaurant, Elmali said: “We’ll continue to do our best.”

On Friday, a magnitude 6.6 earthquake hit Izmir, the third largest city of Turkey with some 4.37 million population.

The death toll from Friday’s powerful earthquake jolting the Aegean region stands at 85, with 220 people receiving treatment at hospital, according to Turkey’s disaster management agency.

China: Top legislature to convene on May 22