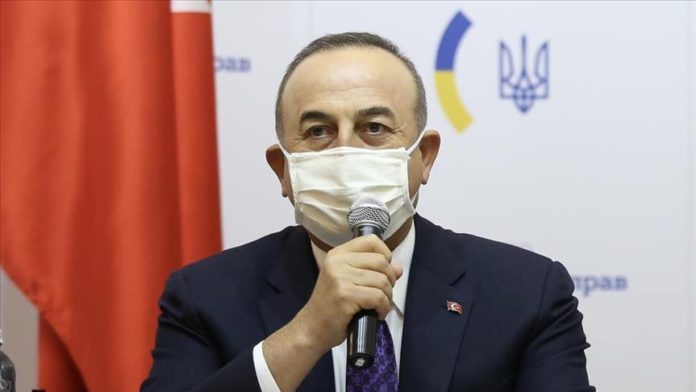 Turkey’s foreign minister on Friday said the dispute in the Donbass region of eastern Ukraine should be solved within “territorial integrity.”

“The problem at the Donbas region should be solved within the territorial integrity and we are happy that the ceasefire continues, despite some small breaches,” Mevlut Cavusoglu said on an official visit to Ukraine.

The situation of Crimean Tatar Turks was also discussed at the meeting with Ukrainian officials, Cavusoglu said.

Touching upon Turkey’s position on Crimea, he said they do not recognize the “unlawful annexation of Crimea.”

“We openly express this at the UN and other international platforms,” he said.

He added that the Organization for Security and Co-operation in Europe (OSCE) special observation mission working under Turkish Ambassador Halit Cevik will continue receiving support from Ankara.

Noting that Turkey-Ukraine relations are “developing rapidly in all areas”, he said: “In today’s talks we had a chance to discuss some bilateral issues as well as some regional issues. From the economy and education to tourism and health, we have ongoing cooperation.”

He added that Turkey, despite the pandemic, hosted 1 million Ukrainian tourists mostly in his hometown of Antalya.

In 2014, Russia annexed Ukraine’s the Crimean Peninsula, a move widely viewed as illegal by the international community, including Turkey and the UN.

They also met Ahiska and Gagauz Turks living in Ukraine. ​​​​​​​