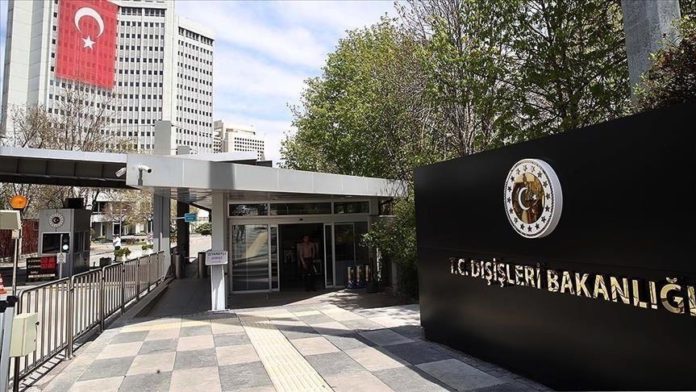 Turkey on Thursday urged the international community to respect the court ruling following which the Turkish parliament revoked the seat of an opposition lawmaker.

The Foreign Ministry said in a statement that the seat of Omer Faruk Gergerlioglu from the Peoples’ Democratic Party (HDP) was revoked in line with the Constitution and parliamentary ordinance.

Some countries have condemned the move.

On Feb. 19, Turkey’s Supreme Court of Appeals, also called the Court of Cassation, approved the ruling on Gergerlioglu, who was sentenced to two-and-a-half years in prison for spreading propaganda for the PKK terrorist group.

The ministry statement added that the country’s top prosecutor on Wednesday filed an indictment seeking the dissolution of the HDP, calling it an undemocratic party that colludes with the terrorist group PKK and seeks to destroy the unity of the state.

The indictment accuses HDP leaders and members of acting in a way that flouts the democratic and universal rules of law, colluding with the terrorist PKK and affiliated groups, and aiming to destroy and eliminate the indivisible integrity of the state with its country and nation.

The move follows growing calls by Turkish political leaders for the HDP to be officially banned. In recent years, more and more HDP executives and elected officials have been charged with terrorism-related offenses.

Turkish leaders have long argued that the HDP is little more than a front group for the terrorist PKK.

“In this process, everyone has to wait for the decision of the Constitutional Court. Commenting on an ongoing legal process is an intervention to the law,” the Foreign Ministry stated.

Noting that political parties are “indispensable” to politics, the statement said it is “essential” that they “carry out their activities peacefully within the framework of universal and democratic rules of law.”

Turkey further called on those “attempting to interfere with internal affairs” of the country to respect the judicial processes carried out by independent courts.

Turkey to announce space program in 2020