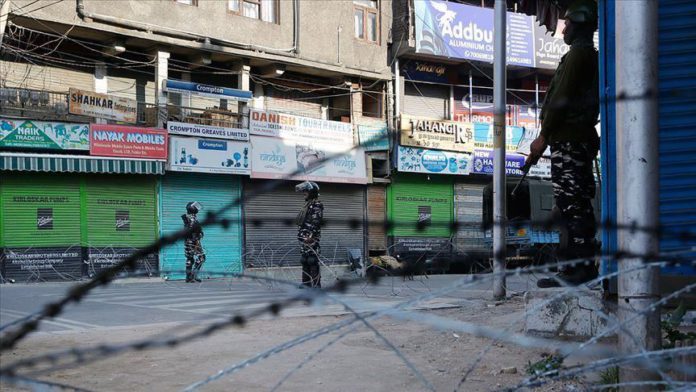 Turkey on Tuesday reiterated its call to the Indian government to ease the current restrictions in Jammu and Kashmir.

“We sincerely desire that Kashmir issue is resolved through peaceful means between India and Pakistan on the basis of the relevant UN resolutions,” according to a statement by Turkey at the 45th Session of the Human Rights Council in Geneva.

Last year on Aug. 5, India scrapped the state’s autonomous status, and divided it into two federally ruled territories. To forestall protests, thousands of people, including political leaders, were jailed.

A communications and security lockdown was also enforced, which continues in one form or the other to date.

High-speed internet has been restored only in two of the 20 districts of Jammu and Kashmir. A few journalists were also booked under a harsh anti-terror law.

Fire in migrant camp in Greece

During the general debate on High Commissioner’s oral update, Turkey expressed concern over the last week’s fire at the migrant center on Lesbos Island in Greece.

“In this context, we support Madame High Commissioner’s call to the European Union to prevent pushbacks and collective expulsions at the sea and land borders of EU States.”

Stressing that the world continues to struggle with the coronavirus pandemic, the statement said: “It is more urgent and essential than ever to protect and uphold the rights of asylum seekers, who are particularly vulnerable.

“We must continue to maintain a human-centered approach while taking relevant measures to slow down the spread of the outbreak and managing our external borders.”

According to authorities, the fire was started by a small group of asylum seekers who were angered by isolation measures to curb the COVID-19 outbreak after dozens tested positive.

The camp had already been under lockdown since early September after a 40-year-old Somali resident tested positive.

Moria camp was one of Greece’s largest reception and identification centers, recently home to around 13,000 people — about four times its capacity.

After the blaze, thousands of refugees and migrants were stranded without shelter, food or water having lost all of their belongings.

Pictures that have been circulating online showed refugees, including hundreds of children and infants, sleeping in nearby cemeteries and fields unprotected.

A new temporary facility has been under construction, authorities said on Monday, while a few unaccompanied children have been moved off Lesbos.

While Greece is struggling to get past the Moria camp tragedy, migrants are still trying to reach its shores, many of them unsuccessfully.

A search-and-rescue operation is underway after a smuggling boat sank 12 nautical miles east of Crete on Monday evening, with 57 people rescued from the sea so far.

The Greek coastguard recovered four bodies — two children and two women — off the eastern coast of Crete on Monday night.

The statement also underlined that the COVID-19 pandemic, economic and financial problems as well as ongoing military offensives by the forces of the Syrian Bashar al-Assad regime and terrorist attacks on the civilians have worsened the already unbearable situation in the country.

“Israel continues to act with absolute impunity in the occupied Palestinian territories,” the statement added.

“The inhumane blockade sustained by Israel stands as the heaviest hurdle for the individuals in Gaza in the enjoyment of their most basic human rights,” it added.

Israel on Tuesday formally signed agreements with representatives for Bahrain and UAE to normalize relations during a White House ceremony presided over by US President Donald Trump.

“Human rights violations in Myanmar, especially the crimes committed against the Rohingya, continue to be a source of serious concern for Turkey,” the statement said.

According to Amnesty International, more than 750,000 Rohingya refugees, mostly women and children, fled Myanmar and crossed into Bangladesh after Myanmar forces launched a crackdown on the minority Muslim community in August 2017, pushing their numbers in Bangladesh above 1.2 million.

More than 34,000 Rohingya were also thrown into fires, while over 114,000 others were beaten, said the agency report titled Forced Migration of Rohingya: The Untold Experience.

ANALYSIS – “A Bridge Too Close?” The geopolitics of the Peljesac...