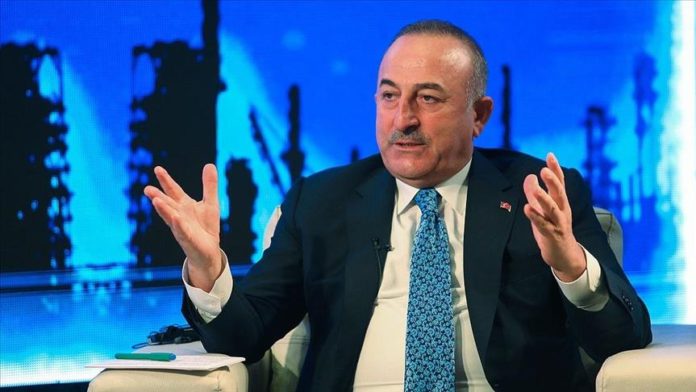 Turkey urges a fair sharing of the resources in the Eastern Mediterranean, while establishing welfare, peace and stability in the region, said the nation’s foreign minister on Monday.

“Let’s solve this together. If there is a wealth, let’s share it. Let’s solve problems through diplomacy and political means,” Mevlut Cavusoglu told a workshop on the Eastern Mediterranean in Turkey’s coastal Antalya province.

Cavusoglu stressed that Greece’s continental shelf claims based on tiny islands off Turkey’s coast are against international law, calling this a “maximalist” approach.

To address recent tension in the region, President Recep Tayyip Erdogan has proposed to the EU holding a joint conference, and the bloc counter-proposed also including states without Eastern Mediterranean coastlines.

“We are now working on it with the EU. We can go down different roads, we have power both in the field and at the table,” he added.

Just because Turkey has the power, it does not assume or try to dictate everything it wants, Cavusoglu added.

“We are in favor of fair sharing. We are powerful normally and legally and we will continue to use this power for the benefit of everyone in the coming days,” he stressed.

EU needs to be ‘honest mediator’

On how developments in the Eastern Mediterranean affect the runup to this week’s EU summit, Cavusoglu stressed that the EU is not an authority on maritime jurisdictions, as the International Court of Justice is.

At the Dec. 10-11 summit, the EU is expected to weigh possible sanctions on Turkey over the Eastern Mediterranean issue, an approach pushed by bloc members Greece and the Greek Cypriots.

Cavusoglu said Turkish-EU relations will continue with a win-win approach or be strained due to unfair decisions taken under the influence of two “spoiled members.”

Underlining that Turkey favors dialogue with Greece, he said Ankara took steps to start talks and even agreed on a joint statement with Greece before it signed an agreement with Egypt in August, derailing the talks.

Stressing that the EU should stop giving unconditional support to Greece and instead make recommendations to Greece and the Greek Cypriot administration, Cavusoglu added: “The EU needs to be an honest mediator, to be a respected organization.”