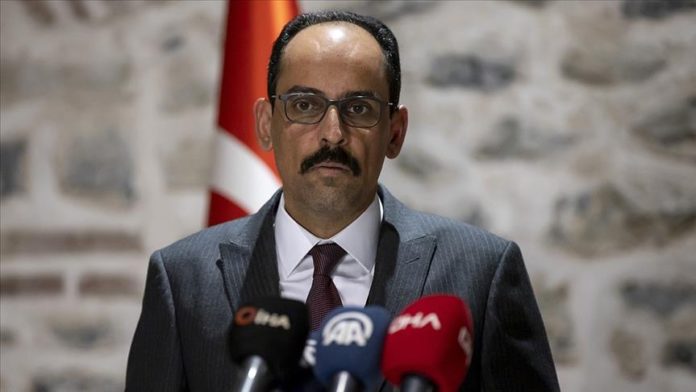 The EU leaders should comprehend the strategic importance of the bloc’s relations with Turkey and should not allow any initiative that would hinder ties, Turkey’s presidential spokesman said on Friday.

The emphasis that a positive agenda between Turkey-EU is still on the table during the talks was important, Ibrahim Kalin said in a written statement on the conclusions of a two-day EU summit held in Brussels.

“After this process, it will be in the interest of all parties to focus on the positive agenda on both sides,” Kalin underlined.

Urging the bloc to give up on its unfair attitude against Turkish Cypriots, he said: “In order to produce a fair and lasting solution to the Cyprus problem, the realities on the island should not be ignored.”

Kalin reiterated Turkey’s stance on the issue, saying that the country would continue being “constructive” for the resolution of the problems in the region and would keep protecting the legal rights of the Turkish Republic of Northern Cyprus (TRNC).

Kalin also urged Athens to agree to Turkey’s offer to hold a regional conference on an ongoing dispute about drilling rights in the Eastern Mediterranean, saying Ankara was ready for unconditional exploratory talks with Greece.

“Turkey and the EU countries must act with a common agenda to develop a real partnership, to resolve issues within the framework of a dialogue based on mutual respect and trust, and to imbue relations with a new impetus,” he said.

Kalin called on the bloc to take tangible steps in line with Turkey’s expectations, including updating their mutual Customs Union, as well as the 2016 migration deal and visa liberation.

EU leaders gathered in Brussels on Thursday for two days of discussions on the EU budget and COVID-19, as well as transatlantic ties and relations with Turkey.

The declaration issued by the summit condemned the opening of part of the city of Maras, also known in Greek as Varosha, and argued that UN Security Council resolutions should be respected.

Later, Turkey’s ruling Justice and Development (AK) Party spokesman Omer Celik took the Twitter to say: “We reject the biased and unlawful decisions added to the conclusions of Dec. 10 EU Summit. This approach is far from a real European vision.”

Stressing that Turkey is a strong European state along with its other qualities, Celik said there could not be Europe without Turkey.

He said Greece and the Greek Cypriot administration were making EU countries, most of which do not share the same view on the Eastern Mediterranean, comply with their views through “veto pressure and neighborhood solidarity.”

He also warned that these countries’ maximalist demands “poison” bilateral relations and prevent a positive agenda.

“The EU should not be captive to this attitude,” Celik said, calling on the bloc to act with a “real vision” and keep its promises to Turkey.

“[EU] should understand that the key to a real Europe is Turkey,” he added.