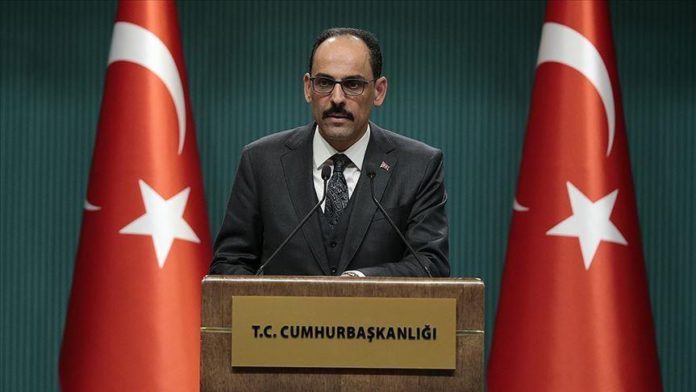 Turkish presidential spokesman Ibrahim Kalin said Wednesday that Ankara is hopeful for improved relations under US President-elect Joe Biden despite a history of problems that will likely transition to the incoming administration.

“He and his team appreciate Turkey’s geopolitical and strategic value in terms of US-Turkish relations, but also on a larger scale of global politics. We believe that we can have a very good positive agenda with the Biden administration,” said Kalin.

One of the major obstacles that will have to be overcome are sanctions sought by several US lawmakers on Turkey over its procurement of an advanced Russian air defense system.

Washington has opposed the transaction, saying the system is incompatible with NATO systems and poses risks to the advanced F-35 stealth jet fighter.

Under pressure from lawmakers, the Trump administration removed Turkey from the F-35 program over the S-400, but has so far refused to impose sanctions under what is known as the Countering America’s Adversaries Through Sanctions Act, which mandates economic penalties on countries that carry out major transactions with Moscow’s defense industry.

Kalin said Ankara turned to Russia for its air defense needs after the US repeatedly refused to sell it Raytheon’s Patriot Missile systems after the US and Turkey were unable to agree on the terms.

The acquisition of the S-400 “in our view, is a result, not a cause, of a number of problems that developed over years,” Kalin said.

“We still believe that we can address this issue. That is, that if the concern is to maintain the security and safety of the F-35 program once they are here in Turkey and once the S-400 is there, we believe that from a technical-military point of view that issue can be addressed,” he said.

“But we also know that it is no longer a technical-military issue. It was conceived by the Congress for having close defense industry relations with Russia, but penalizing Turkey for that will be so counterproductive that it will hurt Turkish-US relations, but also it will not do any good. It will have the reverse effect,” Kalin added.