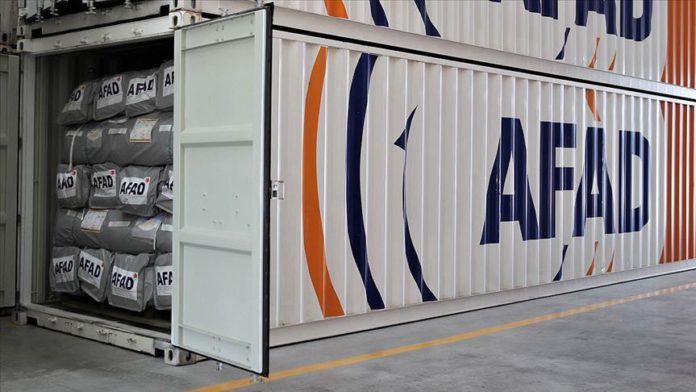 Earthquake survivors have been receiving various help from across Turkey, days after a powerful tremor hit the country’s Aegean region.

Since the magnitude-6.6 quake hit Izmir province last Friday, ordinary citizens in different cities have shared what they have with survivors in an effort to meet their needs.

Turkey’s disaster management agency, AFAD, state officials, non-governmental organizations and institutions and citizens, including children, have tried their best to extend a helping hand to survivors.

Municipalities, volunteers, associations, students, teachers and doctors have exhausted efforts to relieve the pain of those who lost loved ones, houses and other possessions.

In Aydın, one municipality allocated nearly $6,000 from its budget to prepare aid boxes for what AFAD identified as the needs of victims.

Similarly, a group of friends in Izmir gathered their savings and donated almost $600 to help survivors.

Izmir Metropolitan Municipality launched a campaign, “One Rent One Home,” and collected more than $115,000 in less than 24 hours.

Two siblings who survived an earthquake in Elazig, in eastern Turkey, decided to send savings they collected in the last 10 months to those who might need it in Izmir.

And secondary school students from Bartin province in the Black Sea region emptied their piggy banks and pooled the money to send help to Izmir’s survivors.

The company also established six mobile charging stations in areas most affected by the quake with a free speech and internet package for customers in the disaster zone to meet immediate needs. In addition, children were presented with plush Emocans toys — characters created by Turkcell.

Kuveyt Turk, one of the leading participation financial institutions in Turkey, postponed financing installments and credit card payments for three months without receiving additional dividends to support customers who were victims of the earthquake.

The Private Kindergartens Association, with participation from young students and their families, started the “I send toys to my brothers and sisters” campaign throughout Turkey after a young teacher who was rescued from the debris with her student in Izmir asked for children’s toys.

The general president of the association, Murat Kus, said the group is preparing to establish a long-term psychological support system to make it easier for citizens affected by the quake to overcome traumas. “Our team of psychologists of 250 people has already been established. We are also meeting with Turkcell and Vodafone. People who need support will be able to see our psychologist they want through a single number. We want to make it regular for a year,” he said.

Meanwhile, as part of cooperation initiated by Ronesans Holding Group Company, Ronesans Real Estate Investment with the Turkish Association of Psychologists (TPD), children in Izmir are provided with therapy support by special psychologists to address their concerns and improve their psychological condition.

The “Emotion Sharing House” project intends to enable children to more easily overcome earthquake traumas and adapt to their normal lives, eliminate psychological damage that may occur and increase their ability to cope with anxiety.

Also, in the Black Sea region of Turkey, Trabzon Metropolitan Municipality launched the “Trabzon shares its bread” campaign and sent 5,500 loaves of bread to survivors.

Similarly, Fenerbahce Sports Club, one of the leading sports clubs in Turkey, sent a truckload of nearly 5,700 products, including winter clothes to Izmir, as well as masks, toys and stationeries.

Help did not end with the anecdotes mentioned.

Perhaps, more importantly, there were heart-warming letters written by children and adults.

One letter by a young girl started: “Dear friend,” and was full of emotion.

“I call you my friend because I don’t know your name but I felt the pain of the earthquake in my heart with you. I know exactly how it feels,” she said in the letter. “Almost nine months ago, we have gone through the same fears. When you are together, all wounds heal.”

Another girl wrote: “The earthquake you’re experiencing is not a small thing. Imagine how much weight you have on you. You’re stuck in a tiny place, you’re waiting for a light like that. Just don’t lose hope, because there’s always hope.”

The death toll from last week’s quake stands at 114, according to authorities.

As many as 137 victims are still receiving treatment while 898 have been discharged from hospitals, the AFAD said.

A total of 1,621 aftershocks — 44 with a magnitude greater than 4.0 — have rattled Izmir, Turkey’s third-largest city and home to more than 4.3 million residents, the agency said.

Turkey is among the world’s most seismically active zones and has suffered several devastating earthquakes, including the magnitude-7.6 tremor in Marmara in 1999.