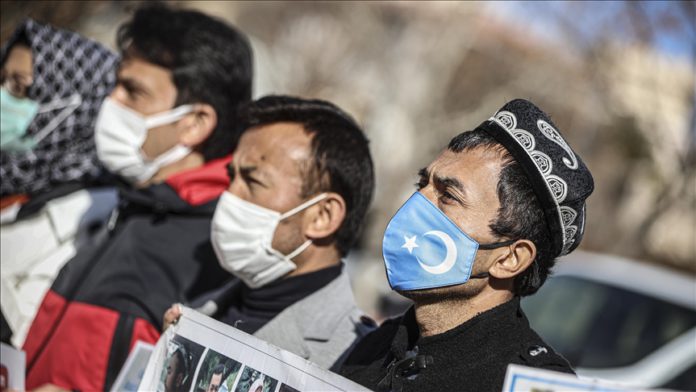 Uighur Turks who have not heard from their families living in East Turkistan staged a protest on Friday outside the Chinese Embassy in Turkey.

They held banners saying: “Where is my family?” and “Release my family”.

The spokesman for the group, Mirzehmet Ilyasoglu, called on the world to raise a voice against those crimes against humanity.

He added that another protest they started outside the Consulate General of China in Istanbul has entered its 46th day.

Hanefi Sinan, head of the Ankara branch of the Union for Turkish Municipal and Special Administration Employees, who was at the protest, said they could not remain silent to oppression no matter where it occurs in the world.

China’s Xinjiang region [East Turkistan] is home to around 10 million Uighurs. The Turkic Muslim group, which makes up around 45% of Xinjiang’s population, has long accused China’s authorities of cultural, religious and economic discrimination.

China stepped up its restrictions on the region in the past two years, banning men from growing beards and women from wearing veils and introducing what many experts see as the world’s most extensive electronic surveillance program, according to The Wall Street Journal.

Up to 1 million people, or about 7% of the Muslim population in Xinjiang, have been incarcerated in an expanding network of “political re-education” camps, according to U.S. officials and UN experts.

China, however, has repeatedly denied allegations it is operating detention camps in its northwestern autonomous region, claiming instead that they are “re-educating” Uighurs.

6 years on, Iran nuclear deal hangs by a thread