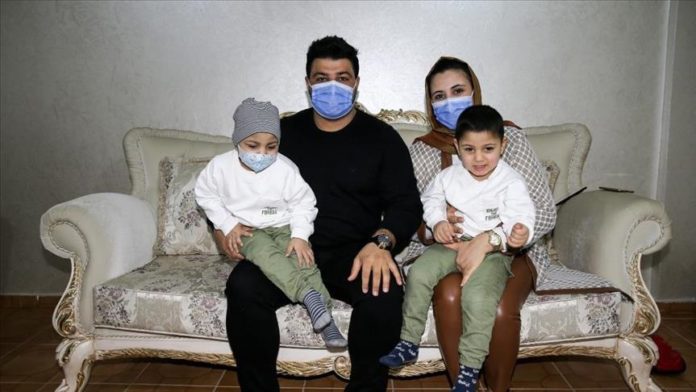 Three-year-old identical twins in Turkey have recovered thanks to a single bone marrow donor.

The transplant was carried out about eight months apart for the twins, who were diagnosed with Mediterranean anemia in their mother’s womb.

The struggle with the disease for brothers Ozgur and Baris Calin began as soon as they opened their eyes to the world.

Blood transfusions started when they were nine months old and their health conditions were closely monitored.

Their parents, who lived in the southeastern Diyarbakir province, moved to the western Izmir province for better treatment.

After examination, Dr. Baris Malbora, a specialist for blood diseases among children at Izmir’s Health Sciences Hospital, diagnosed that the brothers need a bone marrow transplant.

Donor screening was first carried out within the family but there was no suitable donor.

Then, they applied to Turkok, the Turkish cord blood and bone marrow storage bank.

Dr. Malbora, during this time, moved to Istanbul to work at the Gaziosmanpasa Hospital of Yeni Yuzyil University.

The family followed their doctor and moved to Istanbul. At the beginning of this year, Dr. Malbora told the family that a suitable donor was found.

He told Anadolu Agency that when the twins were brought to him, their health conditions were bad.

“Early bone marrow transplantation is very important in the treatment of Mediterranean anemia,” he said, adding that they were lucky that the twins were diagnosed while they were in the womb.

When the suitable donor was found, he decided to apply a different treatment method to the twins, he said.

“We decided to divide the bone marrow into two so that the siblings regain their health. It is a rarely applied method, but we were successful,” he said.

Underlining that the family waited two years for a suitable donor, he said that anyone who gives three tubes of blood to the Turkish Red Crescent can be a hope for patients awaiting a bone marrow transplant.

“Doctors suggested to have another child to treat the children, but we did not dare to do so. My children’s blood was changing every three weeks,” said mother Mizgin Calin.

Talking about the treatment of her children, she said: “This is a miracle for us.”

The donor, who asked not to be named, sent the family a letter after he received the good news. The donor said he was happy to become a hope for the family.

“I am a father. I have a story to tell my daughter. Have a story that you will tell your children throughout your life,” he added.