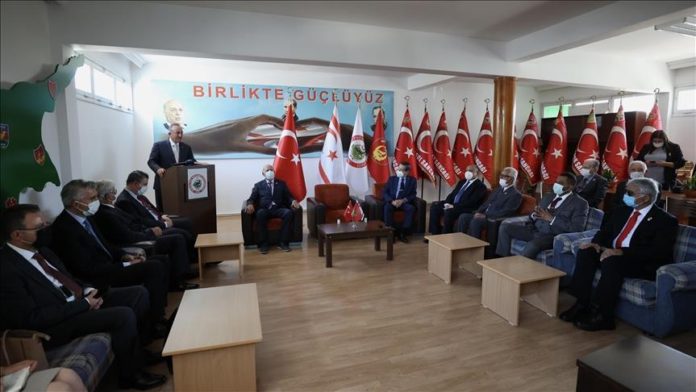 “We say that the TRNC should be on the table as an equal partner and that there can be a permanent peace and solution on the basis of a two-state solution,” Mevlut Cavusoglu said during a visit to the Turkish Resistance Organization (TMT) in Northern Cyprus.

He said Turkey always feels the “strength and support” of the TRNC.

“For more than half a century, we have all been trying to back the Cyprus issue,” Cavusoglu said, adding that Turkey is aware of the support of the TMT for the Turkish Cypriots’ “struggle for existence,” and thanked the group for its efforts.

The head of the TMT, Yilmaz Bora, thanked Cavusoglu for his visit and support.

“Today, we are proud and happy to live in the independent TRNC. These days have not come easy,” said Bora as he recalled the historical background the TRNC has lived through.

Bora said between 1963-1974, Turkish Cypriots lived under attacks by the Greeks and had to leave 103 villages.