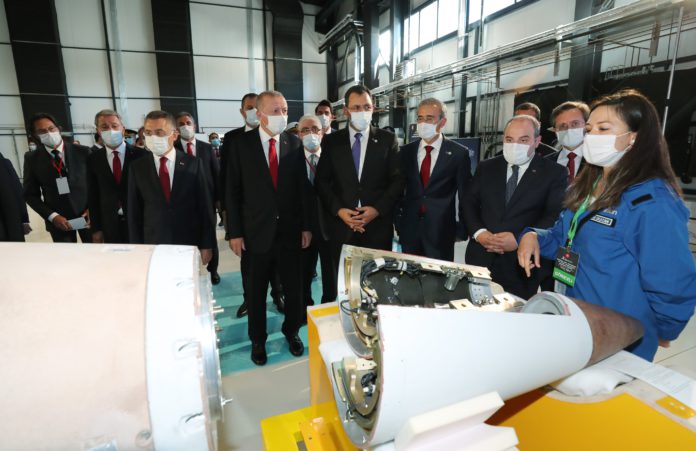 “I would like to announce the start of the first space trials of domestically developed liquid-propellant rocket engine technology,” Erdogan said at the opening ceremony of Turkey’s leading defense company Roketsan’s production facility and research center in the capital Ankara.

“We will also continue our efforts to develop hybrid fuel rocket engines,” he added.

He said Roketsan has developed high-capacity hydrogen fuel cell technology, a clean energy source with applications for the space sector, as well as aviation and transportation.

“The GPS receivers needed for precision-guided munitions and weapon systems have also been produced domestically for the first time,” said the president.

“At this center, we are working on technologies of the future, such as miniature weapons, hypersonic systems, and laser and directed-energy weapons using electromagnetic technology.”

President Erdogan stressed that Turkey does not tolerate any lack of coordination in the defense industry.

“In particular, we never accept products from abroad that we can make in the country. We have brought our nearly paralyzed defense industry back to life,” he said.

“Inspired by the glorious heritage of our ancestors, we reduced our defense industry’s external dependence from 70% to 30%.”

He pointed out that Turkey is among the top countries in production of unmanned aerial vehicles (UAVs), armed UAVs, and offensive UAVs.

“Our Bayraktar TB2 armed UAV can easily hit targets with its laser-guided 230-millimeter missile system. This new development will especially strengthen our forces out on the front,” said the president.

Speaking later at a graduation ceremony at the National Defense University in Ankara, Erdogan said: “We are mounting an effective fight against all threats by balancing our investments in the defense industry and our human resources.”

On the situation in the Eastern Mediterranean, the president said: “Along with our fight against terrorism, we are dealing with the threats to our rights and interests in the region, especially in the Mediterranean and Aegean.”

“Everyone who opposes us on land, in the air, or at sea challenges Turkey’s legitimacy and our determination to protect our rights based on international law,” he added.

Tensions between Ankara and Athens have soared over recent days, after Greece disputed Turkey’s energy exploration in the Eastern Mediterranean as it tries to box in Turkish maritime territory based on small islands near the Turkish coast.

Turkey – the country with the longest coastline on the Mediterranean – has sent out drill ships to explore for reserves on its continental shelf, saying that Turkey and the Turkish Republic of Northern Cyprus (TRNC) have rights in the region.

Turkish officials have said that dialogue for fair distribution of any resources will be a win-win for all sides.