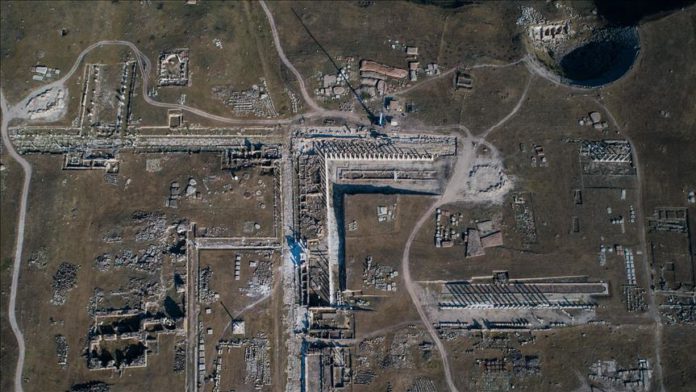 An ancient theater in southwestern Turkey will reopen when restoration work is completed in the 2,200-year-old site next year.

The ancient city of Laodicea, which is listed as a tentative UNESCO World Heritage site, will again start hosting events, a statement from the South Aegean Development Agency (GEKA) said.

Excavation and restoration efforts in the western theater capable of seating 15,000 people are planned for completion in March 2021, the statement read.

“We will comfortably realize the entire project we have committed to by the end of March 2021,” the statement added, citing Celal Simsek, the head of excavations at the site and an archeologist from Pamukkale University in Denizli.

“This structure lost its characteristics from the fourth century AD. However, with the efforts to be carried out, it will regain its former features after 1,600 years,” Simsek added.

Noting that, once opened, the western theater was expected to attract a substantial amount of tourists, Simsek said original materials found in the excavation area was being used in 90% in the restoration.

For this reason, Simsek said he hopes for an award from the Europa Nostra, which evaluates similar projects.

According to UNESCO, Laodicea is the only ancient city in the region with two theaters.

Home to historical ruins dating back to 5500 BC, Laodicea was one of the most important centers of trade, art and sports in ancient Anatolia — the heartland of modern Turkey ­– and has attracted many tourists to the area.

Ready for Taliban talks 'at any moment': Afghan leader