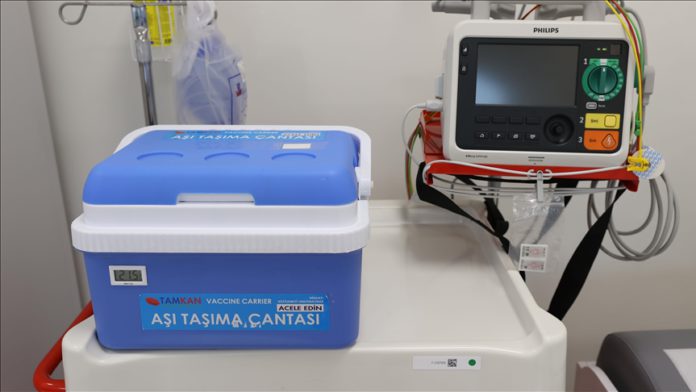 Turkey’s health minister said early Thursday that 4.5 million doses of the Pfizer/BioNTech COVID-19 vaccine will arrive in the country this month.

Speaking after a meeting of the country’s Coronavirus Scientific Advisory Board, Fahrettin Koca said the first 58,000 doses of the vaccine, which will be used in tests, have arrived in Turkey.

Koca said “4.5 million more doses will arrive this month to be administered. Meanwhile, tests of the vaccine will be completed.”

He added that the vaccine will be administered to those whose turn it is.

As of next week, vaccination of those aged between 60-65 will be started, he said.

The Pfizer-BioNTech vaccine was developed by Ozlem Tureci and Ugur Sahin, a couple who are both children of Turkish immigrants in Germany.

BioNTech aims to produce a total of 2 billion doses of the vaccine this year at six production facilities in various countries.

In January, Turkey began a mass COVID-19 vaccination campaign, and a gradual normalization from coronavirus restrictions began on March 1.​​​​​​​

More than 12.35 million doses of a Chinese vaccine have been administered across Turkey so far, according to official figures.

The country has so far confirmed over 2.93 million cases, a total of 29,696 fatalities and over 2.75 million recoveries.

Since originating in Wuhan, China in December 2019, the pandemic has claimed over 2.67 million lives in 192 countries and regions.

Over 121 million cases have been reported worldwide, with recoveries now exceeding 68.63 million, according to figures compiled by US-based Johns Hopkins University.