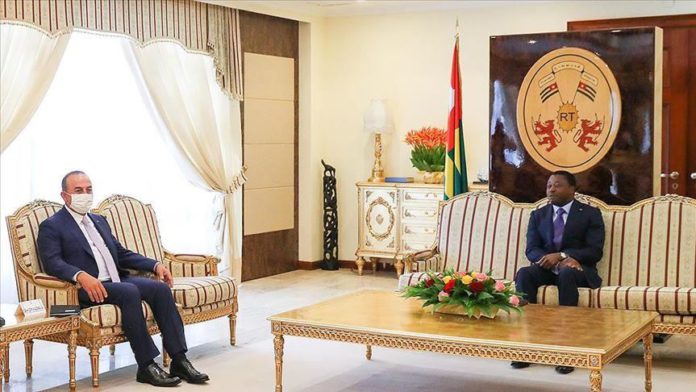 Turkey will open an embassy in the West African country of Togo, the Turkish foreign minister announced on Monday.

After meeting with Togolese President Faure Gnassingbe in the capital Lome, Mevlut Cavusoglu said Turkey will further develop its bilateral relations with Togo.

He said during the meeting, the sides talked about how to improve relations and when the new embassy will be opened.

Since 2003, Turkey and dozens of African countries have mutually opened embassies.

Cavusoglu added that the sides also talked about organizing flights to Togo by Turkish Airlines (THY) as well as cooperation on security and education.

Cavusoglu arrived in Togo Monday as the first stop on a three-nation West African tour, to be followed by Niger and Equatorial Guinea.

Under President Recep Tayyip Erdogan’s leadership, Turkey has pursued an unprecedented outreach to Africa based on the principle of win-win.

Turkey’s presence is felt across the continent, where there are a number of Turkish organizations including the Turkish Cooperation and Coordination Agency (TIKA), Maarif Foundation, and Yunus Emre Institute, among others.

Rally Turkey kicks off with shakedown stage in Mugla

March 26, 2020
We use cookies to ensure that we give you the best experience on our website. If you continue to use this site we will assume that you are happy with it.Ok