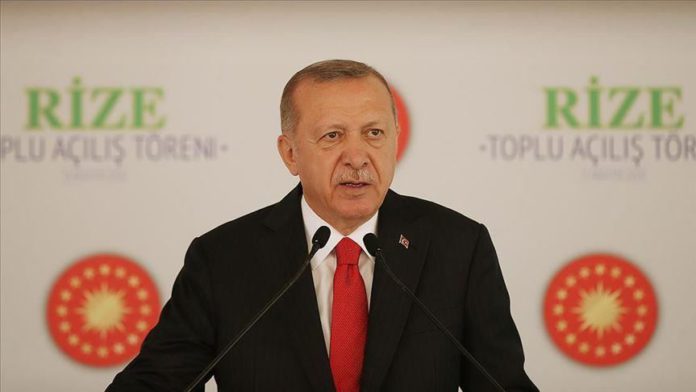 Turkey is fully focused on protecting its rights in the Eastern Mediterranean, Libya, and the Aegean, the nation’s president said on Saturday.

Since 2016, Turkey has launched several cross-border operations in both northern Syria and northern Iraq to eliminate the YPG/PKK terrorists there who plan attacks against Turkey and try to set up terror corridors.

In its more than 30-year terror campaign against Turkey, the PKK – listed as a terrorist organization by Turkey, the US and the European Union – has been responsible for the deaths of nearly 40,000 people, including women, children, and infants. The YPG is the terrorist PKK’s Syrian branch.

“We’re currently focused on achieving the rights and interests of our country in every field at the most advanced level all over the world,” Erdogan said, adding that this is Turkey’s real agenda.

Erdogan underlined that the country is also striving to fight the novel coronavirus pandemic and its fallout, as well as strengthening the Turkish economy.

But after declaring the Greek-Egyptian deal “null and void,” Turkey authorized the Oruc Reis energy exploration vessel to continue its activities in an area within the country’s continental shelf.

The ship will continue a two-week mission until Aug. 23 along with the ships Cengiz Han and Ataman.

Erdogan said the only solution to the dispute lies through dialogue and negotiation and urged Athens to respect Turkey’s rights.