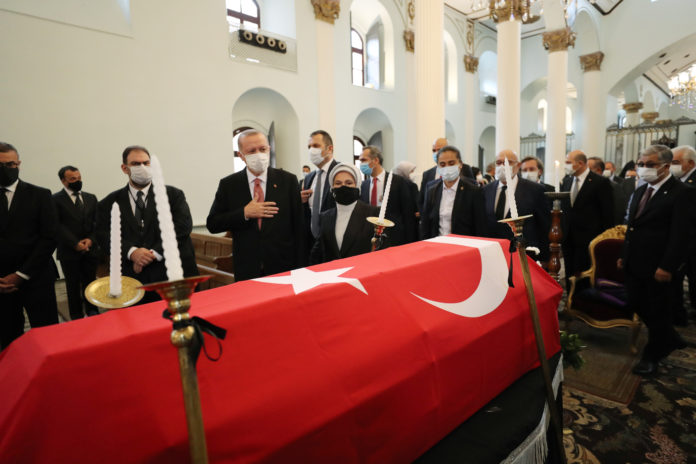 “As it was until today, so it shall be that we will continue to support the [local] Armenian community, which is an important color of richness that makes Turkey strong,” Erdogan said while attending the funeral of Markar Esayan, a Turkish-Armenian member of parliament from the ruling Justice and Development (AK) Party.

Esayan, who died Friday, was a former journalist and became a member of parliament representing Istanbul for the AK Party in 2015.

“When we remember Markar, love for this country and nation comes to our mind, the same as to everyone else. The whole life of our friend with a beautiful heart was spent by supporting the efforts to strengthen Turkey’s democracy, development of rights and freedom, the country’s development, growth and strengthening,” the president said.

Erdogan attended the funeral ceremony held at the Virgin Mary Armenian Church in the metropolis of Istanbul.

Upon his arrival at the church, he was welcomed by the 85th Armenian Patriarch of Turkey, Sahak Mashalian, the Directorate of Communications said in a statement.

Accompanied by first lady Emine Erdogan, Interior Minister Suleyman Soylu, Justice Minister Abdulhamit Gul, Health Minister Fahrettin Koca and Culture and Tourism Minister Mehmet Nuri Ersoy, Erdogan headed to the Armenian Patriarchate of Turkey, which was founded in 1461 upon the instructions of Mehmet the Conqueror, and following his meeting with Mashalian, which lasted about half an hour, he returned to the church for the funeral.

Thanking Erdogan in his speech at the ceremony, Mashalian said that such participation was a “first in the history of Turkish Armenians,” the statement added.

Erdogan and the first lady also extended their condolences to the Esayan family, their relatives and the Armenian community in the country.

Esayan died at the age of 51 in the hospital after he was taken to the intensive care unit Friday morning due to difficulty breathing, according to the hospital’s chief physician.

He had a stomach disease for which he had been receiving treatment for a year and a half.