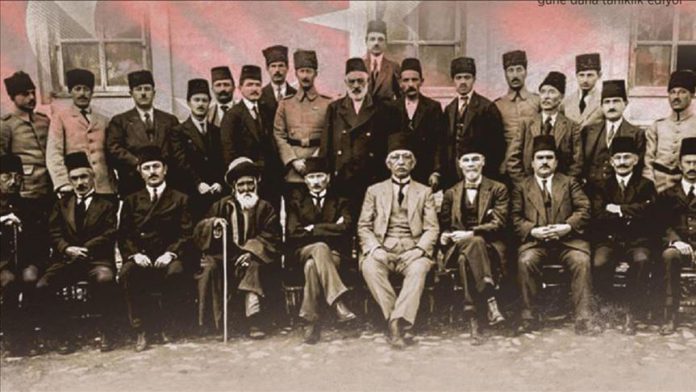 SIVAS, Turkey (AA) – Turkey on Friday will commemorate the 101st anniversary of the Sivas Congress, a milestone on the Turkish Republic’s road to independence.

Mustafa Kemal Ataturk, the founder of the Republic of Turkey, and his brothers in arms held the pivotal weeklong congress of the Turkish National Movement in the eastern Sivas province on Sept. 4, 1919, when Turkish people were fighting the War of Independence.

As part of the 101st-anniversary celebrations, some events will be held in Sivas, which had been the center of the national struggle for 108 days.

The celebrations will be held with a limited number of participants due to the coronavirus measures.

The city will also host the UEFA Nations League match of Turkish and Hungarian national teams on Thursday to commemorate the historic day. The match will be played without fans.

Ataturk continued the struggle for national liberation which he started in the Black Sea province of Samsun on May 19, 1919.

Leaving Amasya in the Black Sea region, he went to Sivas on June 27, a city he called a “reliable city.”

During the meeting in Sivas, the situation of the country was discussed and it was decided to hold a national congress in the city as soon as possible.

Ataturk gave the directives about the Sivas Congress and went to Erzurum to gather a congress on June 28. He came back to Sivas on Sept. 2 and stayed there until Dec. 18.

A group under Ataturk’s leadership laid the basis of the foundation of the Republic of Turkey on Sept. 4, 1919, in the building known today as Ataturk Congress and Ethnography Museum.

According to records, during the seven-day congress, various proposals were discussed for the liberation of the nation, and it ended on Sept. 11, 1919, with the publication of a final declaration.

“Either independence or death,” Ataturk said about the principles reached by the congress.