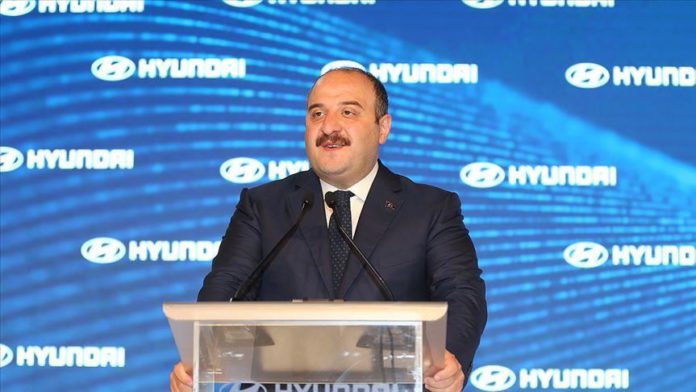 Turkey aims to become a hub for battery production with its investments in battery modules, packages and cells, a senior official said Friday.

To reach this goal, the country will support electric-electronic firms’ investments in the automotive sector, Industry and Technology Minister Mustafa Varank told a ceremony by Korean automotive giant Hyundai that marked the launch of mass production of i20 model automobiles in Turkey’s industrial province of Kocaeli.

Hyundai’s Turkey factory will cover half of all i20 output across the globe, with 90% of all vehicles produced to be exported, Varank noted.

Turkey, which has developed a battery-powered car, SUV, tractor and excavator over the past one year, has its sights set on electricity-powered vehicle technologies.

Varank underlined that the automotive sector is the locomotive for Turkey’s industry sector and offers advantages for other sectors as well, with industrial production expanding with double-digits in May and June.

He also said Turkey had disbursed 1,200 investment incentive certificates during the first six months of the year worth 108 billion Turkish liras ($16.7 billion) and generating 163,000 new jobs.

On economic confidence index data for August that was released Friday, Varank stressed: “The positive trend is continuing, our citizens’ expectations more positive for the post-pandemic period.”

Varank highlighted that Turkey aims to be the largest electric and autonomous vehicle producer in Europe and among the top-five in the world by 2030.

Oil prices up with lowest US rig count since June 2009